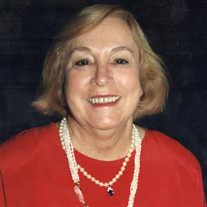 Agnes Juliana “Aggie” Bush was born on July 9, 1929 in Dickinson, North Dakota to Vincent and Suzanne (Follmer) Miklautsch. She was raised in Dickinson and attended Dickinson High School. She married Oren Dallmer Bush on July 19, 1952 in Marquette, Michigan and moved to Oklahoma to start his dental practice in Del City where they later settled. Together, they raised three boys. During Oren and Aggie’s lifetime they enjoyed fishing, showing dogs, gardening, OU football and playing cards. Aggie was a homemaker and her hobbies included art, knitting and gardening. Later in life she spent time reading and praying. The kitchen was her little corner of the world. She loved to cook, and what made the meals taste so good was she always added her secret ingredient, a pinch of love. Agnes was a devout Catholic. She prayed a lot, went to church every Sunday, gave charity to the church and Archdiocese, prayed the rosary, and never ate meat on Fridays. Her patron saint was St. Anthony. If she couldn’t find or lost something, she would pray to him and eventually find what she was looking for and thank St. Anthony. Now, St. Anthony has helped her find her way to eternal life. Blessed are the pure in heart for they will see God. Agnes will see God and will make someone a good guardian angel. Agnes is survived by sons, Michael Gregory of Del City, OK and Patrick Harvey (Patti) of Tulsa OK; grandchildren, Christopher (Amy) and Virginia of Pueblo, CO, Thaddius (Faye) of Woodbury, TN, Nicholas (Chastity) of Shawnee, OK, Kristin of Oklahoma City, OK, Kaitlyn of Broomfield, CO, and Kortney of Dallas, TX; great-grandchildren, Charley, Kobe, Camden, Zoey Ray, Corbin, Kinsey, Trey, Blu and Chase; sisters, Eleonore “Mike” and Cecile “Bill”. She was preceded in death by her husband of 55 years, Oren; son, Terrence; brother, Thomas; and sisters, Marrianne, Theresa, Mary and Karen. She was loving, caring and giving and will be dearly missed. In lieu of flowers, the family asks donation to be made to https://catholiccharitiesok.org/get-involved/donate A Rosary will be held at Ford Funeral Service in the Candlewood Chapel at 6:30 pm with a reception from 6-8pm. A Memorial Service will be held at St. Philip Neri at 10:00 AM on Saturday, January 25, 2020 with inurnment to follow at Sunny Lane Cemetery.

The family of Agnes Juliana Bush created this Life Tributes page to make it easy to share your memories.

Send flowers to the Bush family.