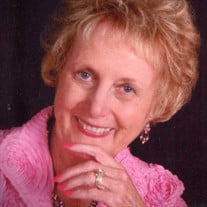 Amie Louise (West) Patterson of Oklahoma City passed away September 2, 2019. She was born May 20, 1940, in Stilwell, Oklahoma to Buena and Gus West. Amie graduated from Stilwell High School and Northeastern State University in Tahlequah, Oklahoma. She was a member of Alpha Sigma Alpha Sorority while attending NSU. After graduating NSU, she married Darrell Patterson of Stilwell in 1961. They moved to Midwest City, Oklahoma to make their home. Amie and Darrell had two sons, James Ronald Patterson and Derek Edward Patterson. Amie started her public teaching career in the Oklahoma City Public School system before moving to Mid-Del Public Schools. She taught for 25 years and touched the lives of many young children since most of her career was spent in the kindergarten classroom. Amie received Christ into her life in 1955 at First Baptist Church of Stilwell. She joined the First Baptist Church of Midwest City in 1961 where she faithfully served in the high school youth program and was also a faithful member of the Fuquay Sunday School Class. She was very active in the community where she served on a number of boards and clubs. She served on the Midwest City Board of the YMCA where she spent many years on the “Strong Kids Campaign” raising money to provide scholarships to needy children. She served on the Mid-Del Library Board which included serving as Chairperson. She was Treasurer of the Red Rose Garden Club of Midwest City. She was the 1st Vice President of the Midwest Premier Book Club and held membership in the Panoramic Book Review Club of Oklahoma. Amie was an active member of the P.E.O. Chapter FF of Midwest City. She also held many places of leadership in both Kappa Kappa Lota State Teachers’ Sorority and the Alpha Delta Kappa National Teachers’ Sorority. She was preceded in death by her parents; her beloved son James Ronald of Midwest City; one sister Datha West Mullins of Fayetteville, Arkansas; three brothers, Wellford West and Bob West of Stilwell and Curtis West of Alamogordo, New Mexico. Amie is survived by husband Darrell; her son Derek and wife Kelly and two lovely granddaughters Darian and Kamryn all of Piedmont; and one grandson Jayden of Shawnee. She is also survived by brother-in-law and sister-in-law Sam & and Sherry Patterson of Oklahoma City; brothers-in-law J.W. Patterson of Lexington, Kentucky, and Harold Rich of Tulsa; sisters-in-law Betty Thurber of Tulsa, Wanda West of Coppell, Texas, and Greta Patterson of Stilwell; and many nieces, nephews, other relatives, and a host of friends. A visitation will be held at Ford Funeral Service in the Candlewood Chapel Thursday, September 5, 2019 from 5:00 – 8:00 PM. Funeral Services will be held at 10:00 AM Friday, September 6, 2019, at Crossing Community Church in Oklahoma City. Burial will be at Arlington Memorial Gardens in Oklahoma City. In lieu of flowers, the family encourages contributions be made to the Parkinson Foundation of Oklahoma.

The family of Amie Patterson created this Life Tributes page to make it easy to share your memories.

Send flowers to the Patterson family.