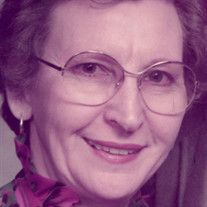 Anna Gail Danley McDaris, 86, of Oklahoma City, OK, passed peacefully on April 10th, 2019 as heaven welcomed its newest angel and reunited her with her husband, mother, father, and sisters. Anna was born in Russellville, Arkansas on April 16, 1933. She graduated from Fort Smith Arkansas High School in 1951. She married William McDaris in 1953, and became a military wife. They lived in several states and France. During his military career Anna worked in the banking industry. After 22 years of military service Anna and Bill moved to Warner Robbins, Georgia and opened their first Chick-fil-a franchise. Eventually, they moved to Macon, Georgia to open their 2nd franchise in 1975. Through their hard work and dedication, they received many awards and honors from the company. In 1992, they retired from Chick-fil-a and moved to Choctaw, OK to be near her family. Anna loved spending time with her sisters and brother. When they were all together, there was lots of laughter and fun times. Over the years they devoted their lives to loving and caring for their many beloved dogs. In 1994, they joined Choctaw United Methodist Church. Anna was an active member of the women’s group, Tues. Morning Ladies Group, and Mobile Meals. She generously supported the children and youth of the church to ensure they could enjoy many activities and also attend church camp. Not only did she love to give financially, she loved to give of herself by praying, sending cards, making phone calls, visiting members with needs and making great desserts. Her church family saw her as a kind, loving, and devoted person with a sweet and beautiful soul. One of Anna’s favorite scriptures was Jeremiah 29:11. “For I know the plans I have for you, says the Lord. They are plans for good and not for evil, to give you a future and a hope.” Anna wanted everyone to have a good life, and she tried to help everyone she could. Anna was preceded in death by her parents, Carol and Bernice Danley, husband, William McDaris, sisters, Mildred Harkins and Jean Wilson. She is survived by her brother, Charles Danley and sister-in-law, Jo McDaris. Nephews include Tommy Harkins, Bruce Harkins (Sherrie), James McDaris, Jr. (Pam), John McDaris (Ellen), Steve McDaris (Shelley), Mike McDaris (Teresa), Chuck McDaris (Cathy), and nieces, Delores Thornsberry (William), Sylvia Webb (James), Debbi Spriggs, Tamara Danley, Sharon McDaris Stephens (Tom), Pam McDaris Wolfe (Bo), and Pat McDaris Strain (Mike). She had many great nephews and nieces, great-great nephews and nieces, and great-great-great nieces and nephews. In lieu of flowers, please donate in her memory to St. Jude Children’s Research Hospital or Shriner’s Children’s Hospitals, or the charity of your choice. Visitation will be held Thursday, April 18, 2019 at Ford Funeral Service from 2-7 p.m. Graveside services will be held Friday, April 19, 2019 at Arlington Memory Gardens in Oklahoma City at 11 am.

The family of Mrs Anna Gail McDaris created this Life Tributes page to make it easy to share your memories.

Send flowers to the McDaris family.