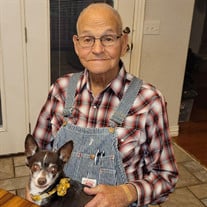 Arthur Lee Foster, Choctaw, OK. - 04/14/1929-01/21/2021 Arthur “Art” was born on April 14th 1929 to Mary Kate Katherine Bell Morton Foster Stafford & Charles W. Foster. He was the ninth of eleven children, he had seven sisters & three brothers. All have preceded him in death. His father passed when he was of a very young age. He was raised in a state ran orphanage in Tahlequah, Oklahoma. When he was old enough to work in the cotton fields, one of his older sisters adopted him to help. He lied about his age and went in the military at seventeen. He was originally in the Army Air Corp, then the Air Force. He was awarded a World War II victory metal and an Army occupation metal, Japan. He spent time in Japan, France, and the U.S.A. during his fifteen-year career. He was a Tech Sargent when he got out. He went to work at Tinker Air Force Base as a missile systems analyst. After his retirement from Tinker, he worked for Sears fixing televisions and vcr’s for six years and then he worked for Sunbelt Electronics as a vcr repairman for five years. He married Viola Marie Gentry on June 30th, 1950. They were married for 48 ½ years when she passed away suddenly in November 1998. They had three children, Charles Foster, Goldie (Foster) Gregory, and Thelma (Foster) Savage. He married Mary Ruth Hoover on January 1st, 2000. We gained a couple of brothers through their union, Bobby Hoover and Mike Wiederstein. Art was a wonderful man with a great sense of humor. You could always count on him for a corny joke. He was truly one of a kind that genuinely cared for everyone he met. To know him was to love him. His kindness and compassion for others was remarkable. He loved the outdoors and Lake Tenkiller. He will be truly missed. Art was preceded in death by: his parents Mary Stafford and Charles Foster, his first wife Viola M. (Gentry) Foster, his second wife Mary Ruth Foster, his son Charles Richard Lee Foster and wife Karen Foster, his daughter Goldie Marie (Foster) Gregory and her husband William Frances “Bill” Gregory, his grandsons Charles Leon Foster, Arthur Jay Foster and Brian Edward O’Neal, & his granddaughter Kisa Elizabeth Stancill. He is survived by his daughter Thelma G. Savage her husband Ronald W “Rusty” Savage of Choctaw, OK, and stepsons Bobby Hoover and wife Amy of Stroud, OK, Mike Wiederstein of Stroud OK, his Grandsons William F. “Billy” Gregory and his wife Allison, Arthur L. Gregory and significant other Noelle, and David G. Foster, his granddaughters Patty A. Bennett, Dorlisa G. Porter and husband Bob, Juanita M “Nita” Butts and husband Brian, Viola R. Hill and husband Scott. Numerous great grandkids and great, great grandkids, a host of nieces, nephews, cousins, & friends. As a family we are requesting mask be worn for the funeral service. Viewing/visitation will be tomorrow January 22nd, 2021 from 12:30pm-6:00pm at Ford Funeral Home 305 South Sooner Road Del City, Oklahoma. Graveside services will be Saturday, January 23rd at 2:00pm, Davenport Cemetery, Davenport, Oklahoma

The family of Arthur Lee Foster created this Life Tributes page to make it easy to share your memories.

Send flowers to the Foster family.