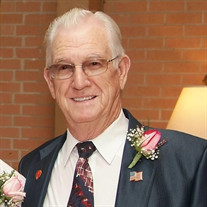 Arthur Edwin “Art” Jones passed from this life into his heavenly rest on Thursday, August 26, 2021, at VA Medical Center in Oklahoma City, Oklahoma. Art was born in Petersburgh, New York, on May 7, 1930, to William W. and Ella Mae Bickford Jones. The fifth of eight children, Art grew up on a small dairy farm in the mountains of upstate New York. At age 19, he joined the Army and soon found himself in Korea at the height of the fighting. There was one bright spot on that battlefield. Art began receiving letters from a sweet Oklahoma girl. Before long, Miss Ruby Florence Ragsdale of Wewoka became the love of his life. The two were married on March 14, 1952, in Ada. For many years, Art supported his wife and four children as an electrician at Del City Electric. In 1976 he purchased the business, which he managed until his retirement in 1997. Art was devoted to his Lord and his family. He loved his wife, children, and grandchildren unconditionally. At the time of his passing, he was a faithful member of Sunnylane Baptist Church. Prior to that, he was a long-time member of First Baptist Church of Moore. He is survived by his brother, Alan Jones of Prague, sister Corina Bakaitis of Hoosick Falls, New York, son Rick (Connie) of Del City, daughters Kathy (Jerry) of Eufaula, Susan Fox of Edmond, Lisa (Eddie) Stearman of Del City, 11 grandchildren, 21 great-grandchildren, and many loving nieces, nephews, and friends.

The family of Arthur Edwin Jones created this Life Tributes page to make it easy to share your memories.

Arthur Edwin “Art” Jones passed from this life into his heavenly...

Send flowers to the Jones family.