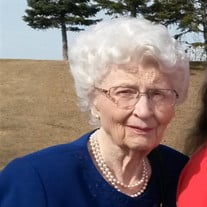 Betty Jean Self Deaton was born on November 17, 1930, in Oklahoma City, Oklahoma, and died on December 22, 2019, in Valdez, Alaska. She was 89 years old. She was a strong believer in her Lord and Savior Jesus Christ from a young age. She shared the Gospel with everyone she met. When she was fifteen years old, she moved from the city to a farm that her parents had bought. While there, she married the love of her life, Floyd Madison Deaton, on February 11, 1950. They were married for 62 years. She graduated from Moore High School in Oklahoma. Soon after graduation she went to work as an operator for SW Bell phone company. After working there, she became the financial secretary for First Southern Baptist Church, where she worked for over twenty years. She was well-loved by her many friends and family. She knew how to throw a party! Her home was always the center of celebration. Betty was a longtime church member at First Southern, followed by Sooner Baptist, First Baptist Valdez, and eventually Cordova Community Baptist. After her husband died, she moved with her son, Charles, and his family to Cordova, Alaska, in 2014. She was not afraid of the unknown, but rather embraced the adventure. Betty is now embracing the adventure of heaven, meeting with her savior face-to-face. She is survived by her sons, Kenneth Wayne and wife Kelly Deaton, and Charles Harold and wife Annette Deaton; her grandchildren, Jesse Ryan and wife Britni, Isaac Madison and wife Shelby, Karen Anne and husband Trent Perry, William and Autumn Deaton; her great-grandchildren Rhyan Elaine and Garrett Deaton; and her siblings Ann and husband Walter Deaton, Norma and husband John Easley, Rosa and husband Howard Falk, Roy Clayton and wife Millie Self, Marvin Self, and Carolyn and husband Joe Jarvis. She is preceded in death by her parents Roy Clack and Oma Ray Self; and her husband Floyd Madison Deaton.

Betty Jean Self Deaton was born on November 17, 1930, in Oklahoma City, Oklahoma, and died on December 22, 2019, in Valdez, Alaska. She was 89 years old. She was a strong believer in her Lord and Savior Jesus Christ from a young age. She shared... View Obituary & Service Information

The family of Betty Jean Deaton created this Life Tributes page to make it easy to share your memories.

Send flowers to the Deaton family.