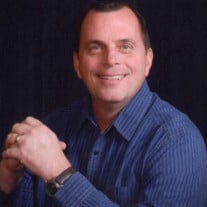 ***Bill’s memorial service will be live-streamed at https://www.firstsouthern.tv/ *** William "Bill" Ballinger, age 63, of Oklahoma City, Oklahoma, passed peacefully with his family by his side on the morning of Monday, February 22, 2021. Bill was born on December 20, 1957 in Nocona, Texas to Sam and Virginia Ballinger. He spent most of his childhood in Oklahoma with his siblings and family, although he resided in many states such as Tennessee, Texas, and Oklahoma. Bill attended college at The University of Central Oklahoma. While in college, he met his future wife and mother to his four children, Elizabeth "Ellen" Ballinger. They were married on May 10, 1980. After completing college, he went on to attend Southwestern Seminary to become a minister. Bill had a heart for service. He was a believer in taking care of and leading others, which led him to become a teacher at various schools, including a local charter school in Oklahoma City, Santa Fe South, where he taught music. He worked in various churches as minister, most recently as the Associate Pastor for Sooner Baptist Church in Del City. Bill's passions included art, gardening, antiques and ministry. He would often be found on any given afternoon tending to his garden, working on a sermon, or painting. Bill was also a passionate singer and musician. Those passions played out in the form of being a member of the Singing Churchmen of Oklahoma, and also in directing performances for the Oklahoma Baptist Children's Choir. Bill was a loving father to his four children and their spouses: Autumn and Justin Paterson, Samuel and Lesley Ballinger, Tucker and Steffanie Ballinger, and Jameson and Dylan Ballinger. Lovingly nicknamed "Poppy" by his seven grandchildren, Adelyn Ballinger, Boston Paterson, Nash Paterson, Sadie Ballinger, Baker Paterson, Emmett Ballinger, and Jolie Ballinger, he could often be found keeping a watchful eye, snuggling them in his favorite chair, and teaching them life lessons they would need for the future. Bill is preceded in death by his mother Virginia Ballinger, and his father, Sam Ballinger. Services will be held to honor Bill's memory at First Southern Baptist Church in Oklahoma City, Oklahoma on Wednesday, February 24, 2021 at 11:00am. Per the family's wishes a private graveside interment will be conducted prior to the memorial service. Face protection during the service is required due to recommended guidelines.

***Bill&#8217;s memorial service will be live-streamed at https://www.firstsouthern.tv/ *** William "Bill" Ballinger, age 63, of Oklahoma City, Oklahoma, passed peacefully with his family by his side on the morning of Monday, February 22, 2021.... View Obituary & Service Information

The family of Bill A. Ballinger created this Life Tributes page to make it easy to share your memories.

***Bill’s memorial service will be live-streamed at https://www.firstsouthern.tv/...

Send flowers to the Ballinger family.