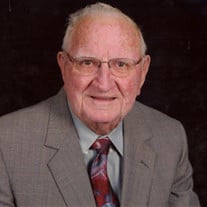 Bill Eugene Lawrence, 94 years of age, of Midwest City, Oklahoma, passed away on February 16, 2020, at Integris on Portland Hospital (Old Deaconess Hospital) in Oklahoma City, Oklahoma. Bill was preceded in death by his wife of 49 years, Shirley H. Lawrence, on January 31, 2002. He was the only child of James H. and Cuba I. Lawrence. Bill is survived by; a Son, Robert Lawrence and wife Evalynne; a Daughter, Teri Weiss and husband Frank; Granddaughter, Mikki Moore and husband Chris; Grandsons, Richard Lawrence and wife Melanie, Adam Weiss and wife Jennifer, Eric Weiss and wife Sabrina; Great Grandchildren, Sara Moore, William Lawrence, Jackson Lawrence, Tucker Weiss, Molly Weiss. Bill E. Lawrence was born in Douthat, Oklahoma, on November 2, 1925. His father, James, passed away when Bill was 7 years old. Cuba and Bill then moved to the Oklahoma City area to stay with relatives and stabilize their lives. He graduated from Capital Hill High School in May of 1943. Bill served in the United States Naval Reserve during World War II. He was initially assigned as a gunner and aircraft service tech on the Martin PBM “Mariner” Long Range Flying Boat. Later he was promoted and spent the remainder of his time as a crew chief for the F4U Corsair Fighter Aircraft on a couple of islands in the Pacific Theatre of Operation. Bill was released from active service in 1946 as a Petty Officer Second Class Aviation Machinist Mate. Bill met Shirley J. Hannula in the fall of 1951 and they were married on July 18, 1952. They had forty-nine and a half years of all the ups and downs that marriage brings with it, but had the faith, respect, and love for each other to let the world know that they were made for each other and nothing would ever separate them. Bill’s professional life was divergent. At age 17 he had his pilot’s license. He worked for 24 years at Tinker Air Force Base in different Civil Service positions, then retiring in 1975. In 1965 he tested and passed for his Broker of Real Estate License in the State of Oklahoma. Bill maintained his Real Estate Broker License until a year before his death. He had many experiences and contacts in his long career as a Broker. Bill’s hobbies included bowling (trophies all over the house), golf (not as many trophies), pool, dominoes, fishing. Bill always stated: “I am very, very proud and happy with my family and friends. The work I have done has interested me enough to drive me to do the best of my ability. No man can ask more!”

Bill Eugene Lawrence, 94 years of age, of Midwest City, Oklahoma, passed away on February 16, 2020, at Integris on Portland Hospital (Old Deaconess Hospital) in Oklahoma City, Oklahoma. Bill was preceded in death by his wife of 49 years,... View Obituary & Service Information

The family of Bill E. Lawrence created this Life Tributes page to make it easy to share your memories.

Send flowers to the Lawrence family.