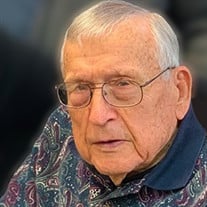 Billy Marion Turney, 95, of Midwest City, went to be with his Heavenly Father May 4, 2019. He was born in Stigler, Oklahoma, Dec. 30, 1923 to Clara Belle Davis Turney and John Robert Turney. Bill graduated from Stigler High School at age 16 and then attended Connors State College where he earned a degree in education. He later went on to earn a Master’s Degree from Oklahoma State University. Bill was active military in the United States Army from 1943-1946, serving during World War II. After the war, he taught school and served in educational administration throughout Oklahoma. He transitioned to civilian affairs with the U.S. Air Force and worked at Tinker Air Force Base as Chief of Base Services for many years. Bill was an active and contributing member of First Baptist Church of Midwest City for more than 60 years, serving as a Sunday School teacher and in other leadership roles. Bill was a faithful Oklahoma State University alumnus, cheering on his Pokes as a Posse member. And he loved watching his grandchildren and great-grandchildren play sports, attending every event and competition possible. Bill was fiercely independent, and he was equally generous. He loved his family and wanted to ensure each were cared for in any way needed. Bill is preceded in death by his wife of 64 years, Geraldine Powers Turney and his grandson Jason Owen. He is also preceded in death by his mother and father, three of his siblings, Jewel Dean Williamson, Lavona Walker and Joyce Morgan. He is survived by five siblings: Juanita Lloyd, Roma Murphy, Donna Allen, Robert Turney and Johnathan Turney. He also is survived by his son Mike Turney and his wife, Lorraine, and his daughter Debra Owen and her husband, Kenneth. In addition, he is survived by his grandson, Brian Turney and wife, Kori, and his granddaughter, Kayte Spillman and husband, Seth. He is also survived by six great-grandchildren, Morgan and Mason Turney, Dylan and Abigail Owen, and Elijah and Olivia Spillman. The celebration of Bill’s life will be May 9, 2019 at 2:00pm at First Baptist Church of Midwest City, 705 E. Rickenbacker Dr.

Billy Marion Turney, 95, of Midwest City, went to be with his Heavenly Father May 4, 2019. He was born in Stigler, Oklahoma, Dec. 30, 1923 to Clara Belle Davis Turney and John Robert Turney. Bill graduated from Stigler High School at age 16... View Obituary & Service Information

The family of Bill M. Turney created this Life Tributes page to make it easy to share your memories.

Billy Marion Turney, 95, of Midwest City, went to be with his...

Send flowers to the Turney family.