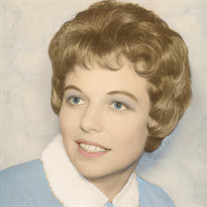 Billie Jeannie Bethers, surrounded by family, passed away on the 2nd of June, 2020 at the age of 91. Billie was born in Davenport, OK on July 22nd, 1928 to James and Beulah Campbell. Billie was the youngest of 4 daughters. Graduating from high school in Tulsa, OK. Some years after graduating Billie would go on to marry her first husband Roy Elvin Six in 1950. Billie was first and foremost a homemaker, taking care of her boys Chris and Mike, but she also worked different jobs over the years. In the 1940’s and 1950’s Jones and Loughlin Steel Co., Lindy Ballpoint Pen Company in Culver City, CA from the late 1950’s to 1963, and as a quality control inspector for the orthodontics manufacturing company ORMCO in Glendora, CA from 1963 to 1970. In 1970 she was united in marriage with her second husband Alvin W. Bethers, happily married until his passing in 1990. Billie was able to call many different places home over the years. Living in Davenport, Tulsa, Luther, and Del City, Oklahoma as well as Grenada Hills, Van Nuys, Simi Valley, Covina, Salinas, and Ontario, California. After Alvin’s passing Billie would become the caregiver for her long-time friend, Christine Hicks. Making sure her friend had groceries, the essentials and saw that Christine was fed and had someone to visit with. Billie would go to her house multiple times a day in her dedication to see to her friend was well taken care of. Christine’s son, Jackson, once realizing his mother’s condition and the effort Billie had been putting into taking care of her, wished to compensate her for that time. Her love for Christine was enough and she refused. In return, Jackson would treat the two to elaborate trips. They would be treated to the best of the best with her long-time friend in places such as, Galveston, TX, The Peabody Hotel in Memphis, TN, and San Francisco. Billie loved to read and was a member of 2 different book clubs. She was a regular at the water aerobics classes at Rose State College and a member of the Midwest Garden Club. She was a longtime member of First Baptist Church of Midwest City, where she had been baptized in 1991. Billie actively worked in the Church Relief Society and the Women’s Christian Group. Above all though, her most enjoyable activity was just sitting and visiting with friends and relatives. She loved God, family, friends and all her animals. Billie is preceded in death by her husband Al Bethers; her parents James and Beulah Campbell; eldest son L/Cpl Christopher J.R. Six a United States Marine who was KIA 2-27-1971 Quang Nam Province, Rep of Vietnam; sisters Pauline Garman of Luther, OK and Georgia Lou Burden of Tulsa, OK; niece Marilyn Cox of Tulsa, OK; nephew Ron Burden of Davenport, OK Survived by her youngest son Michael and wife DeiDre’ Six of Oklahoma City, OK; grandchildren Jeffery Michael Six of Yukon, OK, Samantha Rae Hopkins of Oklahoma City, OK, Claire Mackenzie Six of Oklahoma City, OK; great-grandchildren Reese Six & Korbin Six of Yukon, OK, and Olivia Hopkins of Oklahoma City, OK; sister Thelma Burden of Davenport, OK; nephew Rick and wife Karen Burden; niece Michelle Anthony of Wilkes Barre, PA, Julie Booher of Fayetteville, AR, Sharon Burdon of Davenport, OK; numerous great nieces and nephews; and former daughter-in-law and special friend, Kim R. Tate of Piedmont, OK. In lieu of flowers please consider donating, in honor of Billie, to one of the organizations she loved and cared for, the American Heart Association, Alzheimer’s Association, First Baptist Church of Midwest City or ASPCA.

Billie Jeannie Bethers, surrounded by family, passed away on the 2nd of June, 2020 at the age of 91. Billie was born in Davenport, OK on July 22nd, 1928 to James and Beulah Campbell. Billie was the youngest of 4 daughters. Graduating from high... View Obituary & Service Information

The family of Billie Jeannie Bethers created this Life Tributes page to make it easy to share your memories.

Billie Jeannie Bethers, surrounded by family, passed away on...

Send flowers to the Bethers family.