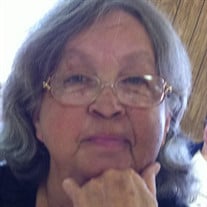 Billie Earline Claxton left this world on December 22, 2019 at the age of 76. She died in her home in Shawnee, Oklahoma surrounded by loved ones. Earline was born on September 17, 1943 to Thelma Christine (Stephens) and Alva Douglas Kerr in Sulphur, Oklahoma. She and her three sisters were raised by their mother Christine and their dad, Boots Walton. She met the love of her life, Denver Claxton Sr., at a sock-hop and they married on March 2, 1959 in El Reno, Oklahoma. Together they had three sons and two daughters. Earline served the citizens of Oklahoma for over 22 years working at the Office of State Finance, the Court of Criminal Appeals, and retiring from the Office of Indigent Defense. After retirement she and Denver were avid travelers and were able to sell their country home and travel in their RV for over six years, often stopping in cities and towns with Bingo establishments. She always wanted to go out yelling “Bingo.” Earline and Denver also enjoyed treasure hunting and metal detecting. They were instrumental in forming the “Twin Territories Treasure Hunting Club” in Oklahoma City. It’s fitting that Earline passed the week of Christmas as she always claimed her favorite song ever was “I want a Hippopotamus for Christmas” by Gayla Peevey. She was also proud of the fact that as a grade school student she had donated pennies to the Oklahoma City Zoo to help buy the first elephant to the zoo, named Judy. Earline is survived by her five children, Denver Claxton Jr. (Bud) of McLoud, Norma and Perry Floyd of Shawnee, Kelly and Richard Thorpe of Clarksville, Tennessee, Joe and Cynthia Claxton of Wellston, and Ray Anthony (Tony) Claxton of Norman. She will be remembered lovingly by her 15 grandchildren, 23 great-grandchildren, her sisters Loretta Stevens and Sharon Levine, brother-in-law Omar and Linda Claxton, and sister-in-law Betty and Roul Jaques. Earline will be missed greatly by her many cousins, nieces, nephews, and special friends. Earline is preceded in death by her husband of 52 years, Denver Claxton Sr., her parents Christine and Boots Walton, three great-grandchildren, her sister Judy Matheson and her daughter-in-law Kelle (Doyle) Claxton. A memorial service to honor this wonderful woman will be held on Monday, December 30, 2019, at 2 pm at the Ford Funeral Home, 305 S. Sooner Road in Midwest City, Oklahoma, 73115. The family invites everyone to stay for a short reception following the service to share stories and further honor her memory.

Billie Earline Claxton left this world on December 22, 2019 at the age of 76. She died in her home in Shawnee, Oklahoma surrounded by loved ones. Earline was born on September 17, 1943 to Thelma Christine (Stephens) and Alva Douglas Kerr in... View Obituary & Service Information

The family of Billie Earline Claxton created this Life Tributes page to make it easy to share your memories.

Send flowers to the Claxton family.