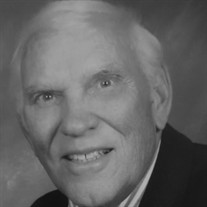 Billy Don Girod, beloved Son, Brother, Husband, Father, Grandfather, Great-Grandfather, Uncle and Friend to so many, was welcomed into the loving arms of his Lord and Saviour on June 14, 2020. Bill was born on May 5, 1933 to Willie Albert and Leva Francis (Shrum) Girod in Duncan, OK and moved to Midwest City, OK in 1955, after returning from the Korean War, serving eighteen months in the U.S. Army, 507 AAA Battalion, where he was stationed in Japan in the, and made life-long friendships with Otis Miller & Rufus Dunn. On November 5, 1955 Bill married Veda, the love of his life and best friend, and enjoyed over 56 years of marriage. Bill and Veda made their home in Del City in 1956, and lived there the rest of their lives. Bill worked for Yow Brake and Clutch Supply as an outside salesperson, for over 25 years, and in 1982, Bill and Veda purchased 1-40 Auto Parts in Del City, and later also purchased May Discount Auto Parts and West 10th Auto Parts, until the businesses were sold in May 1995. Bill enjoyed traveling and was proud to say he had been to all 50 states, with the last state being Hawaii in 2015. Bill and Veda were members of Southside Nazarene Church where they taught Sunday School classes for teenagers for many years. Bill and Veda enjoyed taking the teens on trips to Colorado, Red River, NM and various other places. They were not only a teacher to them, but were like a Parent to many of them who loved them dearly. Bill and Veda later became members of Del City Nazarene Church. Bill wanted to be remembered as "A Man of God" and showed his Godliness in the kindness he showed to everyone he met. Bill was preceded in death by his parents, Albert & Leva Girod, his sisters Loretta Alexander, Louise Rea, Ella Mae Tomlinson and brothers Leon Girod & Lloyd Girod. Bill is survived by one sister, Nelda Girod of Duncan, and one brother, Royce Girod of Oklahoma City. Two children, Gary Girod and wife Mary of Norman, Paula Churchill and husband Dan of Newalla, five grandchildren, Sarah White and husband Jason White, Jason Girod, Corey Churchill and wife Melisa, Ben Girod and wife Brittany, Jon Girod and wife Kaitlyn, Ryatt Girod,and five great-grandchildren, Zoe Girod, Jackson White, Madeline White, Carson Girod, Ryland Bagby, and many nieces and nephews. Formal visitation for family and friends will be held on Tuesday, June 16th from 6:00 to 8:00p.m. Funeral Services to be held on Wednesday, June 17th at 10:00 a.m., both to be held at Ford Funeral Home, 305 S. Sooner Road, Del City, OK, with internment following at Sunny Lane Cemetery, Del City, OK. **Due to Covid-19, all attendees will be required to wear a mask** Thank you for your understanding,

Billy Don Girod, beloved Son, Brother, Husband, Father, Grandfather, Great-Grandfather, Uncle and Friend to so many, was welcomed into the loving arms of his Lord and Saviour on June 14, 2020. Bill was born on May 5, 1933 to Willie Albert and... View Obituary & Service Information

The family of Billy Don Girod created this Life Tributes page to make it easy to share your memories.

Send flowers to the Girod family.