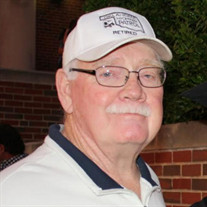 On Friday, April 16, 2021, Billy Wayne Rickey, loving husband, father, grandfather, and brother, passed away at the age of 74. Billy was born on January 21, 1947 in Oklahoma City, Oklahoma, to Charles and Viola Rickey. He graduated from Del City High School in 1965. He had two sons, Jeffrey and Mark, and one daughter, Anji, that he deeply loved. In 2005 he married Marla Gail Rickey, with whom he spent the rest of his time on Earth with. Billy enjoyed the great outdoors where he loved to hunt, fish, and most importantly golf. He was an avid golfer and always enjoyed spending time with his friends at the office after they finished their round of golf. Above all else, he valued spending as much time as he could with his beloved family being a wonderful husband, father, grandfather, and brother. Billy was known for being the life of the party. He was outspoken and full of stories. He never met a stranger anywhere he went, always telling as many stories as he could with the short encounters he had with others. Billy was preceded in death by his father Charles Rickey, mother Viola Rickey, brothers Monty Rickey and Larry Rickey, and nephews Monty Boy Rickey and James Rickey. He is survived by his wife Marla Rickey, sister Rosalee Doshier, sons Jeff Rickey and wife Shana, Mark Rickey, and Johnathan Hays and wife Jennifer, daughters Anji Sullivan and husband Larry, Ann Hays Peters and husband Steve, and Brenda Hays, grandsons Brett, Tanner, Dalton, Brandon, Ethan, and Spencer, granddaughters Samantha, and Kate, 4 great grandchildren, and several cousins, nieces, nephews, and other family members.

On Friday, April 16, 2021, Billy Wayne Rickey, loving husband, father, grandfather, and brother, passed away at the age of 74. Billy was born on January 21, 1947 in Oklahoma City, Oklahoma, to Charles and Viola Rickey. He graduated from Del... View Obituary & Service Information

The family of Billy W. Rickey created this Life Tributes page to make it easy to share your memories.

Send flowers to the Rickey family.