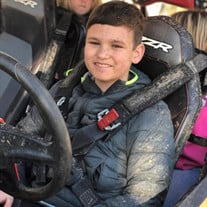 Blake “Eston” Phillips - "Eston" after his paternal grandpa Son of Michael Ray Phillips and Misty Marie Phillips married May 1998. Blake was born at Stormont Vail Hospital in Topeka, Kansas on November 10, 2007, (though he was MIO) his daddy was so proud to announce our boy would be here in 9 months. And you bet he gloated to be right. Blake grew up the first 7 years of his life in Topeka, Kansas, with his dad, mom, sister, memaw and his dog Sophie who grew up with him since 1. In 2014, the family decided to move closer to family, so they all moved to Sherwood Shores, Texas. Though mom and dad separated in the same year Blake primarily resided there with his dad, sister, and aunts. Blake then moved in with his mom, stepdad and little sisters in Midwest City, Oklahoma in August of 2020 due to his dad’s health. Blake was always such a loving, caring, empathetic, funny, shy kid and was so incredibly smart. He always had a fun fact for you! He loved learning about War History, especially WWII History. Blake was a true coffee drinking, video game loving kid by the age of 2. Blake was so strong, especially when life handed him some really trying times in the last 3 years. He lost so many important people it was like he would barely catch his breath to face it again. But he took comfort in the Lord and fought on with hope in his heart every day. Blake was preceded in death by his cousin Emma “Lou” Valliquette at the delicate age of 19 years old in September 2018; grandpa Roy Hawkins; memaw Beckie Brown; and his dad Michael Phillips. Blake passed away suddenly on April 14, 2021, at the delicate age of 13, at OU Children’s Hospital from undiagnosed Leukemia. Blake is survived and will be incredibly missed by his mom Misty Phillips; sisters Hailey F. Phillips, Hope Smith, and Talli Smith; step-dad James Smith; aunts Kristi Valliquette, Katie Smith and Caitlin Hawkins; uncles Chris Brown, Dakota Brown, Kyle Hawkins, Buck Smith, Darrin Valliquette, and Johnny; grandpa Kent Brown; step-grandparents Alyce Hawkins and Sheree Smith; and cousins Sara and Anna Valliquette, Braeden Joe Brown, and Maddison Smith.

Blake &#8220;Eston&#8221; Phillips - "Eston" after his paternal grandpa Son of Michael Ray Phillips and Misty Marie Phillips married May 1998. Blake was born at Stormont Vail Hospital in Topeka, Kansas on November 10, 2007, (though he was MIO)... View Obituary & Service Information

The family of Blake Eston Phillips created this Life Tributes page to make it easy to share your memories.

Send flowers to the Phillips family.