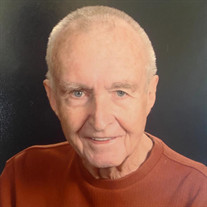 Bobby “Bob” Gene Green, 77, of Moore, Oklahoma passed away on Saturday, October 23 at home surrounded by his wife and daughters. Bob was born in Hondo, Texas on May 28, 1944, to Leslie Orville Green and Anna Louise (Potts) Green. He graduated from Ponca City High School in the class of 1962. Bob married his wife Donna (Lowman) Green on August 19, 1972, in Ponca City at Liberty Baptist Church. Bob and Donna lived in many places over the years as he was in the Air Force. During his military career Bob and Donna were stationed at Athens Greece and various other assignments stateside. Bob later in his career had a tour at Seoul Korea. Bob retired from the Air Force in 1991 after 25 years. They ended up in Del City, Oklahoma where they also lived for 25 years while he worked at Tinker Air Force Base for 12 years. While living in Del City the family joined Sunnylane Southern Baptist Church and Bob was actively involved in the building of the new church. When Bob wasn’t spending time with his family or helping at the church he enjoyed bowling, fishing, watching Nascar and OU football. In 2016 Bob and Donna moved to Moore, Oklahoma to be near family. Bob is survived by his wife Donna; daughter Kimberly Bearden and husband Randall of Moore, OK; daughter Rebecca Green and partner Cameron Peery of Oklahoma City, OK; son Jeffrey Green and wife Yuki of Okinawa, Japan; grandchildren Halle Blacksten, Taylor Bearden, Chelbi Bearden, Alex Goode, Kento Green, Laykin Ryan, Cormac Peery, Emerson Bearden, and Amelia Peery; and his fur babies Jenny, Zoe, Gabby and Minnie. He is preceded in death by his parents Orville and Louise Green and his beloved pet Sadie who was known as his 4th child. The family would like to extend a special thank you to Rodney, Andrea, Joy and Julie from Life Springs Hospice and In-Home Health Care. In lieu of flowers please donate to your local animal shelter or The Humane Society.

Bobby &#8220;Bob&#8221; Gene Green, 77, of Moore, Oklahoma passed away on Saturday, October 23 at home surrounded by his wife and daughters. Bob was born in Hondo, Texas on May 28, 1944, to Leslie Orville Green and Anna Louise (Potts) Green.... View Obituary & Service Information

The family of Bobby Gene Green created this Life Tributes page to make it easy to share your memories.

Send flowers to the Green family.