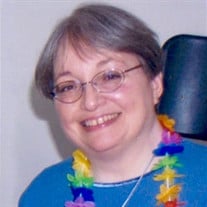 Brenda Jane Atkins was a resident of the Mid-Del area for all 63 years of her life. She was born on May 26, 1956 in Oklahoma City to George L. Cockrum and Marjorie M. Cockrum (Forshee). Brenda had two younger siblings, Lee and Sandy, and was sure to tell you that she was the nicest, most well-behaved of Cockrum siblings. She attended Del City Elementary, Kerr Middle School, and Del City High School. During her time at DCHS, Brenda was a devoted member of the Del Aires, singing soprano in the school’s top choir. She was very active in her youth group at Sunnylane United Methodist Church. After graduating from Del City in 1974, Brenda attended the University of Oklahoma for a year before beginning what would become a long career in the oil and gas industry. She first worked at Sohio as a Division Order Analyst before moving to Kerr McGee, where she remained for over twenty years. Brenda married the love of her life, Patrick Atkins, on January 20, 1989. On January 30, 1994, Brenda was in an accident that left her an incomplete quadriplegic. Although the coming months and years were sure to be trying, Brenda’s unwavering faith in the Lord carried her through. For the first few years after her accident, George and Margie came over every day at 6 A.M. so Pat could go to work, staying until all the dishes were done after dinner. Those years were made easier still by the endless prayers and support of friends and family who showed up in a variety of ways. Kerr McGee was also good to Brenda in the wake of the accident; they held her job for her while she focused on adjusting to her new normal, welcoming her back a year to the day after her accident. In the ensuing years, Kerr McGee worked hard to accommodate Brenda, often allowing her to work from home when need be. As a young woman, Brenda had many hobbies including music, painting, cross-stitch, and ceramics. However, she had one passion that remained steadfast throughout her life––church. A member of Sunnylane United Methodist Church, Brenda loved the Lord and her unyielding faith was an inspiration to anyone who knew her. She was a member of the Two or More ladies prayer group, where she met some of her best friends. Later in life, she attended Choctaw Road Baptist Church with her daughter Stephanie when she was able. On July 30, after a long battle with complications that stemmed from her injury, Brenda went home to be with her Lord and Savior. While we are sad without her here on Earth, we rejoice knowing that she has been made whole, running, dancing, and singing in heaven with those who have gone before her. Brenda is survived by her husband Patrick M. Atkins, her children Kevin Atkins, Michelle Calloway and her husband Christopher, Stephanie Milo and her husband Louis, and her grandchildren Steven Atkins, Samantha Atkins, Toni Calloway, Jamie Calloway, Brianna Bishop, Christopher Bishop, Brandon McCants, and Cayden McCants. She is also survived by her father, George Cockrum, brother Lee Cockrum and his wife Lynn, and sister Sandy and her husband Wayne Mosby, as well as many nieces, nephews, great-grandchildren and great-nieces and nephews. She is preceded in death by her mother, Marjorie Cockrum. Services will be held on Monday, August 5, at 10 A.M. at Sunnylane United Methodist Church in Del City. The viewing will be held on Sunday from 1-6 P.M. at Ford’s Funeral Home. In lieu of flowers, please consider making a donation to the Sunnylane United Methodist Church Memorial Fund.

Brenda Jane Atkins was a resident of the Mid-Del area for all 63 years of her life. She was born on May 26, 1956 in Oklahoma City to George L. Cockrum and Marjorie M. Cockrum (Forshee). Brenda had two younger siblings, Lee and Sandy, and was... View Obituary & Service Information

The family of Brenda Jane Atkins created this Life Tributes page to make it easy to share your memories.

Brenda Jane Atkins was a resident of the Mid-Del area for all...

Send flowers to the Atkins family.