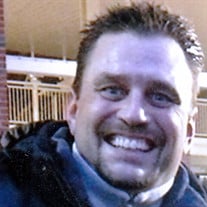 Sunday December 15, 2019 the world lost a brave and selfless man, Brian Charles Pope, at the age of 46. Born on May 29th, 1973 to Charles and Sherry Pope, in Midwest City, Oklahoma. The town he would go on to serve during his career with Emergency Medical Services. Brian proudly served with the Midwest Regional Hospital Ambulance Service for over 12 years. Protecting the community, he was raised in. Brian embodied the qualities of his favorite hero, Superman. Risking his own health and safety to be there for those in need of help. During this time, he would meet his future wife, Cindy. Brian and Cindy were happily together for 6 years. Following his time on the ambulance Brian was given the opportunity to move into hospital administration. He would spend the last three years at Alliance Health Midwest. There wasn’t anyone working in and around the Midwest City hospital environment who didn’t know his name or have some direct interaction with him. He was loved by everyone and he will be greatly missed not only by his co-workers, but the entire community he spent his life serving, Midwest City. Brian is survived by his wife Cindy Pope, his children; Reagan and Reese Smith, Father Charles Pope and his wife, Patsy, Mother Sherry Pope, Sister and husband, Melissa and Spence Decker of Edmond, as well as a proud uncle to his niece and nephew, Lyric Elizabeth and Lennon Gabriel. Brian had a deep love for everything Superman; he believed the icon to be the sum of his aspirations – to help humanity wherever he was needed. He volunteered for any and every civic event where he could be of service. Assisting the elderly whenever he had the opportunity. He was an enormous movie fan – loving action and science fiction specifically. Brian was also a massive fan of 80’s music, even in the face of his loved ones teasing him incessantly. Never backing down, letting his flag fly high and being exactly who he wanted to be without the worry of what anyone else thought. While his loss was unexpected, we can be thankful he passed away peacefully at home in his sleep. His loss has been felt tremendously across the entire city of Midwest City and we will never encounter another soul like his.

Sunday December 15, 2019 the world lost a brave and selfless man, Brian Charles Pope, at the age of 46. Born on May 29th, 1973 to Charles and Sherry Pope, in Midwest City, Oklahoma. The town he would go on to serve during his career with Emergency... View Obituary & Service Information

The family of Brian Charles Pope created this Life Tributes page to make it easy to share your memories.

Send flowers to the Pope family.