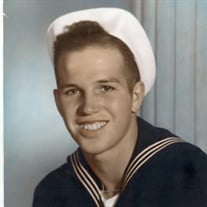 Buster Mack Salyer, was born August 4, 1933 in Muskogee, Oklahoma. Buster departed this life on Wednesday, March 27, 2019 following a brief illness. He is preceded in death by his parents, Buster Grayford Salyer and Mae Margaret King. After graduating from Muskogee High School, Buster enlisted in the U. S. Navy in November of 1951 and went on to serve on the USS Jenkins and USS Fletcher. He received an honorable discharge in 1955 after 4 years active military service. Buster married Mary Frances 'Fran' Claunch on Christmas Day in 1957. The two have shared 61 years of marriage. He is survived in life by Fran and their two sons, Steven Craig Salyer of McKinney, TX and Jason Scott Salyer of Choctaw, OK; 6 grandchildren, Stephen Salyer of Andrews, TX, Amber Ott of El Reno, OK; Patrick Salyer of McKinney, TX, Mary Alberson of Allen, TX, Kayla Courtney of Oklahoma City, OK, and Jonathan Salyer of McKinney, TX; six great grandchildren; and, a sister Betsy O’Rourke of Port Charlotte, FL. Buster attended Oklahoma State University, where he achieved a Bachelor of Science degree in Electrical Engineering in 1959. He went on to dedicate the next 34 years of his life as a civil servant at Tinker Air Force Base working on both the B52 and B1 programs. Two of Buster’s favorite hobbies included golf and genealogy. Buster and Fran spent many years researching the Salyer family heritage, and published their extensive research in a book entitled, “Westward Branches of the Salyer Family: A Salyer Genealogy” in 1998. They traveled across the US to visit Salyer counsins at Reunions and his Navy shipmates at their reunions.

Buster Mack Salyer, was born August 4, 1933 in Muskogee, Oklahoma. Buster departed this life on Wednesday, March 27, 2019 following a brief illness. He is preceded in death by his parents, Buster Grayford Salyer and Mae Margaret King. After... View Obituary & Service Information

The family of Buster Mack Salyer created this Life Tributes page to make it easy to share your memories.

Send flowers to the Salyer family.