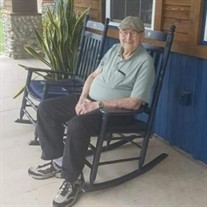 Calvin Lynn (Cal) Barbaree, 80, of Oklahoma City, died Sunday, February 28, 2021 after a fifty-year battle with heart disease. Cal was born to Elmo Lynn Barbaree and Sadie Cleo Williams-Barbaree on January 16, 1941 in Eldorado, Arkansas. He was raised there, along with his brother, Phillip Tom Barbaree. He attended Smackover High School where he was active in football, basketball, and track. After high school, he attended Oklahoma Panhandle State University in Goodwill, OK where he received his Bachelor of Science in Chemistry. During that time, he met and then married his life-long love, Charlotte Raye (Sherry) Peterson on May 26, 1962 at First Presbyterian Church in Guymon, OK. After college, they moved to Ponca City, OK where he worked for Conoco. They started their family there by welcoming two daughters, Michelle Diane (Micky) Barbaree-Hoopes and Joana Sharon Barbaree-Jeffries. Soon after, Cal took a job with Celanese Chemical Plant in Pampa, TX. He devoted his life to working hard for Celanese and caring for his family, which had grown by adding a third daughter, Noelle Joyce Barbaree-Lankford. Cal and Sherry raised the girls in Pampa and when the youngest graduated, he transferred with Celanese to Corpus Christi, TX. His career wrapped up in Lewisville, TX and he retired his 32-year career. Upon retirement, he and Sherry moved to Oklahoma City where they lived for the next 21 years. Throughout his life, he was a dedicated Sunday School teacher and deacon, serving at several Baptist churches. He was even called to preach at the ripe old age of 15. In retirement, he served in his church’s prison ministry and Celebrate Recovery, an addiction support program. He substitute-taught at OKC high schools and at a vocational community college and worked part-time at DeWalt Tools. He was most relaxed and happy when he was fishing, wood-carving (or “whittlin’”), and sitting around “shooting the breeze.” On this Earth, he gave his all to lead as many souls as he possibly could to Christ. Now he rejoices with his Savior in Heaven and awaits with anticipation for us all. Cal was preceded in death by his wife, Sherry Barbaree, parents Elmo & Sadie Barbaree, father and mother-in-law Charles & Donna Peterson, brother Phillip Barbaree, niece Tracie Mansfield, and many uncles, aunts, and cousins. He is survived by daughters Michelle (Chris) Hoopes, Joana (Robert) Jeffries, Noelle (Toby) Lankford, sisters-in-law Gwen Barbaree and Frankie (Spencer) Herzer, nephew Shawn Barbaree, niece Donna (Billy) Shiflett, grandchildren Joel McGallian, Drew McGallian, Rachel Lankford, Chelsea Lankford, step-grandchildren Justin (Kacey) Hoopes, Codie (Kristen) Hoopes, Linsey Jeffries, Brayden Jeffries, step-great grandchildren Harlow Hoopes, Bowen Hoopes, Adelyn Hoopes, Kinley Hoopes, and many uncles, aunts, and cousins. In lieu of flowers, memorial contributions may be made to the American Heart Association or Celebrate Recovery.

The family of Calvin Lynn Barbaree created this Life Tributes page to make it easy to share your memories.

Send flowers to the Barbaree family.