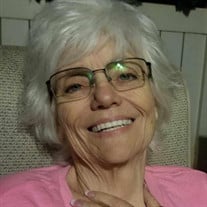 Carol Sue “Suzie” Carter passed away, surrounded by her family, in OKC on January 3, 2020 from complications of pneumonia. She was 75 years old and a current resident in Newalla, OK. She was a long-time resident of Del City, OK (50+ years) Suzie was born November 9, 1944 in Prague, Oklahoma to Joe and Joanne Estes. Her parents and sister, Lynda, lived a military life that allowed her to see much of the world, experiences that she cherished for her entire life. A 1963 graduate from Southeast High school, she continued at Rose State where she was a theater enthusiast. As well as also attending Oklahoma City Community College. She is survived by her husband of 46 years, Richard Lee “Dick” Carter. He loved her unconditionally and shared each step of her journey. From children to animals, lake houses to boats, even an acreage in the country. If it made Suzie happy, Dick supported her. Suzie was Chief of Medical Media Production Services at the VA hospital where she worked for 30 years. While at the VA she spearheaded disaster preparedness moulage to prepare for emergency training. After retiring from the VA, she went to work for Oklahoma Emergency Management helping many people recover from disasters. She volunteered for many organizations throughout the years, especially those based on Animal Welfare. She left a lasting impact for many people and animals. Her goal in life was to love and all she ever desired was to be loved. She was unconditional with everything she encountered. Dick and Suzie’s relationship began to bud after she showed up at Save Auto and asked for the parts to overhaul her engine. When she told him that SHE was the one performing the task, he offered to help her. Over the course of the repair, a romance grew, and their life together began. He was her best friend and confidant. She had three children; Angie, Jennifer, and Mark. She enjoyed taking them camping, being in-volved with their sports, and making clothes for every school function imaginable. Over the years, she became something different to each child. Angie remembers belly laughs the most. Jennifer reflects long talks and traveling. Mark is thankful for the quality time that she spent loving his children. She was especially proud of her grandchildren. She loved taking them to see musicals, movies, and encouraged their own theatrical expressions through moulage and dress-up. Again, she was unconditional in her expression of love for them. She started with Madison, in inclusion and teaching to give back by bringing her to “work” with her for many years at the VA and following on to Animal Shelters and Community Outreach. This continued with all her grandchildren, from bringing them to events or participating in all of theirs. She supported them through all of their activities, from sports events, school events, and music performances. She was always there to tell them how wonderful they were, even if they weren’t. She learned so much from her grand-children, and they too learned if not as much…even more from her. When her grandchildren began to bless her with her great-grandchildren, she was able to continue these legacies…her love shined through and for each of her great-grandchildren. Every pet she had was one of her babies. She could remember the name and personality of each animal she rescued and/or placed. In many organizations she volunteered for, she was somewhat known as the “Neighborhood Dog Whisperer” and she led by that gracefully. She would be a first phone call if there was a dog in need, because whomever reached out to her knew that the animal would be in the most loving arms and care the world had to offer. Treating the animals with the utmost kindness. She has babies now at home; Duchess, Shady, Lacy, Harry, Rex, and Oliver, who continue to wait for her return that she will forever watch over until they get to cuddle her again. “Suzie radiated love and kindness. She was always ready to be a helping hand for those in need, the epitome of unconditional love”. Suzie is survived by her husband of 46 years Richard Lee “Dick” Carter and all of her treasured animals. She was preceded in Death by her Mother Joanne Estes and father, Joe Estes. She has one sister Lynda (Estes) and husband Jim Coonfield, OKC, OK Suzie had three children and Angie (Pogue) Ayars and friend Tim Tapia, Ewa Beach, HI; Jennifer (Pogue) and husband Larry Grant, Yukon, OK; and Mark Pogue, Midwest City, Oklahoma. Suzie loved her grandchildren Madison (Coldiron) and David DeWitte, Yukon, OK; Jordan (Grant) and Sam Almohandis; Yukon, OK; Jesse Grant, Yukon, OK; and Chelsea DeShazo, Moore, OK. Penelope Pogue, Midwest City, OK and Paxton Pogue, Midwest City, OK Wondrous love exuded for her four great-grandchildren Amberlynn (Madison); Emmitt (Jordan); Kirsten Jae “KJ” and Luke (Chelsea). Please join us for a celebration of Suzie’s life: January 8, 2020 at 10 AM Ford Funeral Services 305 S. Sooner Rd. Midwest City, OK Viewing January 7, 2020 from 9 AM to 8PM (Family present from 5-7). Suzie had such compassion for animals and the family would appreciate a donation to an animal rescue or charity in her name.

Carol Sue &#8220;Suzie&#8221; Carter passed away, surrounded by her family, in OKC on January 3, 2020 from complications of pneumonia. She was 75 years old and a current resident in Newalla, OK. She was a long-time resident of Del City, OK (50+... View Obituary & Service Information

The family of Carol "Suzie" Carter created this Life Tributes page to make it easy to share your memories.

Carol Sue “Suzie” Carter passed away, surrounded by her family,...

Send flowers to the Carter family.