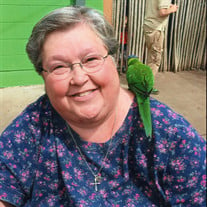 Carolyn Dianne Fanning passed during the night of December 3, 2019 at the age of 67. She was born January 3, 1952 in Morehead, NC to Shirley and Fred Hall. Growing up with four other siblings; Cathy, Brenda, Ellen and Pat. Carolyn attended Del City High School, Graduating in 1970. After graduating she would go on to meet the love of her life Ken Fanning on a blind date set up by Ken’s sister, Wilma. The two would later be married on December 3, 1971. During her outstanding 42-year career in the banking business, Carolyn and Ken had four children; Tracey, Travis, Joe and Chrissy. As a Southern Baptist she impressed the importance of faith on her children. First and foremost, Carolyn loved her family, but she was also an artist at heart. She loved arts and crafts, especially ceramic painting. Creating many lovely pieces cherished by the family. Going to events for her grandchildren was a big passion of hers. Making it to the grandkid’s basketball, softball, football and baseball games. As well as pageants, band concerts, theater and any other activities they were involved in. Showing love for her family by always being present when possible. Carolyn is survived by her husband Ken Fanning; children Tracey and husband Jack McKee, Travis and wife Nichole Fanning, Joe and wife Sarah Fanning, and Chrissy Reynolds; grandchildren Hunter, Wyatt, Alissa, Dillon, Brooklyn, Brennan, Savannah, Bryce, Brylee, Shelby, Seth, Sydnie and Gage; Great-grandchildren Adaleigh, Jackson and Desirae. She was preceded in death by her parents Shirley and Fred Hall; mother and father-in-law Paul and Billie Fanning; Grandson Jackie Lee; Sister-in-law Wilma; Brother-in-law Doug; and Aunt Ginney “Love is patient, love is kind. It always protects, always trusts, always hopes, always perseveres. Love never fails” (1 Corinthians 13:4,7-8) All flowers and cards for the family may be sent to Ford Funeral Service. 305 S. Sooner Rd Midwest City, OK 73110

Carolyn Dianne Fanning passed during the night of December 3, 2019 at the age of 67. She was born January 3, 1952 in Morehead, NC to Shirley and Fred Hall. Growing up with four other siblings; Cathy, Brenda, Ellen and Pat. Carolyn attended Del... View Obituary & Service Information

The family of Carolyn Dianne Fanning created this Life Tributes page to make it easy to share your memories.

Carolyn Dianne Fanning passed during the night of December 3,...

Send flowers to the Fanning family.