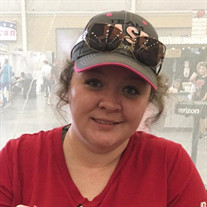 Cassandra Elaine Summers, a wife, mother, and friend passed unexpectedly on June 28th, 2020 at the age of 44 in Midwest City, Oklahoma. Cassandra was born in Portsmouth, Hampshire, England, United Kingdom on January 8th, 1976. She lived in England for a few years before moving to the United States in 1979. She had her first child, Trent Summers on December 18th, 1994 and welcomed her second child, Brianna Summers, on April 19th, 1998. She went on to marry Jerry Summers on October 11th, 1998. Cassandra was incredibly gifted in art. She had the ability to turn ordinary objects into beautiful creations. She was a loyal friend and cared immensely for those she loved. She also enjoyed going to concerts and loved rock music. She had the most amazing relationship with the Lord, and knew at the end of her life here, she would be home in heaven where she belonged. She will be deeply missed by many. She is survived by her husband Jerry Summers of Midwest City, son Trent Summers and his wife Bethany of Norman, daughter Brianna of Midwest City, and sweet furbabies Sandy, Ariel, Freya, Sugar and Godric. She is preceded in death by her father Martin Turner, Mother-in-law Joyce Summers, grandparents Helen and Henry Redd, good friends Ray Morissey and Richard Morissey, and beloved pet precious.

The family of Cassandra Elaine Summers created this Life Tributes page to make it easy to share your memories.

Send flowers to the Summers family.