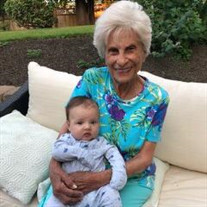 Cecilia Rakestraw passed away on the morning of August 22, 2020, at Oklahoma Heart Hospital. Born on October 15, 1925 in Kansas City Kansas, Cecilia was nearly 95 years old when she passed. Her family meant everything to her. She lived happily for the past nine years at St. Ann’s Retirement Home in Northwest Oklahoma City. Before that she lived in Midwest City, Oklahoma. Cecilia was born to Sicilian immigrant parents, Salvatore (b 1892- d 1954) and Congetta Tannura (b 1904-d. 1985). Cecilia had one sibling, older brother Philip Tannura who predeceased her; Philip was born in 1920 and died 1996. Cecilia met her first husband, Floyd Leslie Bacon, through her brother Philip who worked with Floyd during the war years. Cecilia and Floyd L. Bacon were married on July 18, 1942 in Kansas City, Kansas. They had four children who survived Cecilia: James L. Bacon, Michael L. Bacon, Sam C. Bacon and Jacquelyn Bacon. Cecilia and Floyd and family lived in many places: Kansas City, Kansas; Long Island New York; Fairhope, Alabama; and Midwest City, Oklahoma. Cecilia received her GED and had a successful career in real estate, both in Midwest City, OK and in Sacramento, California. During the Sacramento years she became a member of the exclusive “million dollar club” for Century 21 Real Estate. She was a longtime member of St. Philip Neri Catholic Parish in Midwest City where she served on the Altar Society and also worked to help vulnerable people through the St. Vincent De Paul emergency fund. She was a faithful contributor to St. Jude’s Children’s Hospital. Cecilia was pre deceased by two husbands. Floyd died in an auto crash in April of 1988. In 2000, Cecilia married William “Shorty” Rakestraw, a local real estate broker in Midwest City Oklahoma. Their marriage lasted until 2004, when Shorty passed away. Cecilia moved to St. Ann’s Retirement Center in 2011, where she gained many good friends. She enjoyed playing cards, and bingo. She was also an avid reader. A lifelong Catholic, she said the rosary every day and attended Mass on the weekend. Cecilia enjoyed traveling with friends, including trips to Australia, Europe as well as many cruises. She loved swing music, anything by Frank Sinatra, footlong hot dogs and Braums’s soft serve ice cream. When she laughed really hard she whistled. Even at 94 years of age, Cecilia’s memory and intellect were strong. Cecilia is survived by her four children and their spouses: son James L. Bacon and spouse Rosa Nelson; her son Michael L. Bacon and spouse Debbie Bacon; Sam C. Bacon and spouse Suzy Bacon, and Jacquelyn Bacon Ostrom and spouse Hans A. Ostrom. She remained very close to former daughter in law Margie (Bacon) Drew. She is survived by her sisters-in-law Lucille Bacon and Margaret Fuston. She is survived by members of the Tannura family, both in the United States and in Sicily. Cecilia had eleven grandchildren, including Floyd Bacon, Tim Bacon, Ed Bacon and Austin Bacon; Stephanie Owens and Andrea Parsons; Brent Bacon and Jana Bacon; Caroline Allcorn and Erik Bacon; and Spencer Ostrom. She also leaves twenty-three great grandchildren. Ford Funeral Home in Del City is in charge of arrangements. In lieu of flowers and other tributes, the family asks that donations in Cecilia’s name be made to St. Philip Neri Church and School, 1107 Felix Place, Midwest City, OK 73110. Due to the covid 19 pandemic, the celebration of Cecilia’s life will be postponed until a later date.

Cecilia Rakestraw passed away on the morning of August 22, 2020, at Oklahoma Heart Hospital. Born on October 15, 1925 in Kansas City Kansas, Cecilia was nearly 95 years old when she passed. Her family meant everything to her. She lived happily... View Obituary & Service Information

The family of Cecilia Bacon Rakestraw created this Life Tributes page to make it easy to share your memories.

Send flowers to the Rakestraw family.