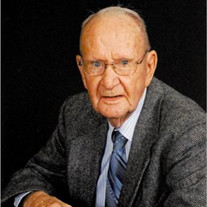 Charles L. Ligon age 97, passed away peacefully on January 19, 2021 at Alliance Health Hospital in Midwest City, Ok. Charles was born on May 11, 1923 to Loyd H. Ligon Sr. and Susie McAlester Ligon. Charles lived a rich full life, serving as a founding member and Deacon at Del City Church of Christ, serving his community as the Manager for the Meals on Wheels Program at Del City Church of Christ for several decades as well as serving his country in the U.S. Navy until his honorable discharge due to health reasons. After 31 ½ years of service as a civil servant, Charles retired from working as a scheduler for KC 135 Aircraft at Tinker Air Force Base. Charles met and married the love of his life of 64 years, Joyce Ligon, until her death in 2009. They made their life-long home in Midwest City, Ok raising their two daughters, Peggy Williams and Patsy Sanders. Charles was preceded in death by his loving wife, Edna Joyce Ligon, his parents Loyd and Susie, his brothers George Ligon and Loyd (Bud) Ligon Jr., his sisters Edith Scott, Marie Mynat, and Billie Joe Gilliam, two sisters-in-law, three brothers-in-law, one son-in-law and one great great-grandson. Charles is survived by his daughters Peggy and Patsy, eight grandchildren, fifteen great-grandchildren, and five great great-grandchildren.

The family of Charles Lewis Ligon created this Life Tributes page to make it easy to share your memories.

Send flowers to the Ligon family.