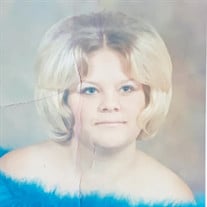 Cheryl L. Freeman (Moses), age 64, passed away peacefully on January 21, 2020 in the home of her son where she was surrounded by loved ones after a brief battle with cancer. Cheryl was born March 18, 1955 in Emporia, Kansas. She recently moved from McLoud to Moore, Oklahoma to be closer to her children. Cheryl was retired from the City of Oklahoma City, and was proud of the years she was active with the Oklahoma City Police Department. On most nights you would find Cheryl watching crime TV shows. Cheryl especially looked forward to Friday nights when she would go to her sons for dinner and watch Live PD, one of their favorite shows to watch together. She had an undeniable passion for coaching softball and spent many years alongside her best friend, Judy Sanders, where together they coached their daughters on the Shockers softball team. Later in life Cheryl quickly stepped up to the plate when her son asked if she would coach an adult co-ed softball team for him and his friends. The entire league lovingly referred to Cheryl as “Coach Mom” and it was proudly printed on her team jersey. It was no surprise to anyone (except Cheryl) that she was awarded the leagues Coach of the Year her first year of coaching the team. Cheryl was also an avid sports fan off the field. Cheryl was a big fan of University of Oklahoma football and the Atlanta Braves baseball team. Cheryl is preceded in death by her father, Raymond C. Freeman Jr.; aunt, Shirley Konarik; as well as Flora Hoffman and Gene Williams, who both held a special place in Cheryl’s heart. Cheryl is survived by her mother, Margaret Freeman; daughter, Maggie Hoffman-Hayslip “Little Girl” and husband Gerald; son, William L Hoffman Jr. “Bubba”; husband/friend, Chris Moses; mother-in-law, Carol Moses; grandsons, Matthew and Jakob Gates; and great-granddaughter, Grace Gates. She will also be missed by 3 brothers, Donnie, Bernie (Kathy), Ronnie (Arlene); a sister, Debbie Stephens; and several nieces and nephews with whom she maintained close relationships. A service celebrating her life will be held at 11am on Tuesday, January 28, 2020 at Ford Funeral Service at 305 S. Sooner Rd. Midwest City, OK. Cheryl’s family will receive friends and family at a reception immediately following the service.

Cheryl L. Freeman (Moses), age 64, passed away peacefully on January 21, 2020 in the home of her son where she was surrounded by loved ones after a brief battle with cancer. Cheryl was born March 18, 1955 in Emporia, Kansas. She recently moved... View Obituary & Service Information

The family of Cheryl L. Freeman (Moses) created this Life Tributes page to make it easy to share your memories.