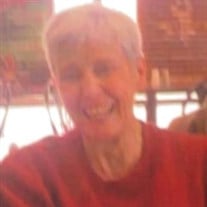 Cheryl was born January 25, 1939 in Snyder, OK to Claude and Velma Webber. She joined them in Heaven on March 30, 2022. They moved to the Midwest City area in 1943. Cheryl spent all her school years in Midwest City schools, graduating from MWCHS in 1957. In 1958 she and Keith Lillegaard were married and were blessed with their daughter, Lori Lea, in 1962. They had many happy, fun-filled years together but unfortunately the marriage ended in 1976. Cheryl had a varied career, from serving on the Governor’s Staff, to working with the CEO and President of Sonic Industries. Cheryl moved to Houston and married Jim Sidwell in 1982. She worked at NASA Johnson Space Center until 1990 when she and Jim moved to Washington D.C. They retired at an early age and moved back to Oklahoma. They had a wonderful time, traveling, going to sporting events and just enjoying life. Cheryl was preceded in death by her parents, sister and brother-in-law Thelma and Herman Miller, brother and sister-in-law Leon and Jane Webber, as well as several aunts, uncles, cousins and nephews. Lori’s Daddy (Keith) also preceded her. Cheryl leaves behind her wonderful husband Jim, beloved daughter Lori Lea (Chris) Cooney, and the absolute light of her life her grandson Jake, as well as several nieces, nephews, cousins, and friends. She was also preceded in death by her dearest and closest friend of 61 years, Ina (Idy) Sibley. Cheryl enjoyed life to the fullest, always laughing and joking with family, friends, and anyone she met. She always said “when I stop laughing that will be the end”. The laughter stopped on Wednesday, March 30, 2022. Visitation will be at Ford Funeral Service from 9am-8pm. Services will be held at Ford Funeral Service – Candlewood Chapel on Tuesday, April 5th at 2:00p.m. with the burial to follow at Arlington Cemetery. In lieu of flowers please consider donating to the Midwest City Special Bombers for the upcoming Special Olympics in Stillwater, OK.

Cheryl was born January 25, 1939 in Snyder, OK to Claude and Velma Webber. She joined them in Heaven on March 30, 2022. They moved to the Midwest City area in 1943. Cheryl spent all her school years in Midwest City schools, graduating from... View Obituary & Service Information

The family of Cheryl Moreen Sidwell created this Life Tributes page to make it easy to share your memories.

Send flowers to the Sidwell family.