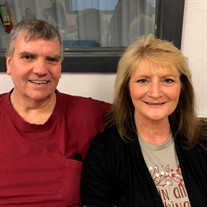 Darren D. Hunt, age 57, passed away peacefully surrounded by family and friends on Saturday, March 30, 2019 in Midwest City. He was born on April 23, 1961 in Barstow, California to Don and Darlene Hunt. Soon after, the family moved to Oklahoma where he became involved in Scouts and other activities offered in the area. He achieved the high honor of Eagle Scout and then graduated from Del City High School. After graduation there were many things that gave him enjoyment such as being with friends, breaking horses, playing in a band as a drummer, and spending time at the lake. He found the love of his life, Nita Hunt, through a singles’ group hosted at church. They courted and were eventually married on July 27, 1992 in Del City. He spent his 26 year career at Tinker Air Force Base as a sheet metal machinist/mechanic. As a young adult, he loved to spend his time listening to music, spending time at the lake, going on road trips, refurbishing trucks, and spending time in nature. In later years, he enjoyed taking his children water skiing and tubing on the lake, spending time with his beloved wife, and going to the movies with his father. His artistic ability, including building beautiful wood bridges and sculpting with metal, was well known among his family and friends. He is survived by his wife, Nita Hunt; his children, Jennifer Luttmer and her husband, Robert, James Dixon and his wife, Lauren, and Crystal Gray and her husband Kyle. He is also survived by his grandsons, Jacob and Bryson Luttmer and Cameron and Connor Dixon. In addition he is survived by his brother, Darrald Hunt and his wife Sandy and his sister, Dawna Hunt and her husband Billy as well as nieces and nephews. His warm smile and loving hugs which blessed all he came in contact with will be missed most by his family and friends. Visitation will be Tuesday, April 2, 2019 at Ford Funeral Service from 12pm-8pm. Funeral services will be 10:00am Thursday, April 4, 2019 at Connect Church in Midwest City. Burial will follow at 3:00pm at Non Cemetery in Non, Oklahoma.

Darren D. Hunt, age 57, passed away peacefully surrounded by family and friends on Saturday, March 30, 2019 in Midwest City. He was born on April 23, 1961 in Barstow, California to Don and Darlene Hunt. Soon after, the family moved to Oklahoma... View Obituary & Service Information

The family of Darren Dale Hunt created this Life Tributes page to make it easy to share your memories.

Send flowers to the Hunt family.