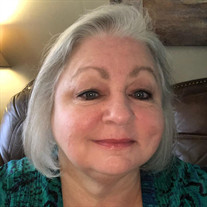 Debra (Debbie) Kay Crouch, 60, of Del City died unexpectedly early Sunday morning October 11, 2020. She was born in Oklahoma City on February 7, 1960 to Marion Carroll Young and Sylvia Jo Young. Debbie grew up in Del City, Oklahoma with her parents and sister Dana Baker. A graduate of Del City High School Class of 1978 Debbie pursued a career in many industries, most notably, her love for people shined through with her working with Geriatrics and the elderly. Lastly, she returned to school at the Central State Massage Academy graduating as a licensed massage therapist which allowed her to work on her own with her studio at Saffron Salon and Spa Boutique. Debbie’s only child Austin Wade Crouch was born to her and her husband at the time on November 2, 1994. All who knew her know how much she cared for Austin and the pride she had for him. Debbie married her husband Eddie Lynn Alexander on June 21, 2002. In addition to marrying the love of her life, she was also happy to gain a wonderful extended family of step children, Justin Curtis Alexander, Jessica Lynn Alexander and Rachel Diane Alexander. A special lady who fiercely loved her family, and friends that became family to her. Debbie was a ‘daddy’s girl’ and independent tom boy all her life and loved the outdoors and nature. She lived life to its fullest extent riding motorcycles to RV trips, NASCAR, camping and Razor trips, there wasn’t a venue Debbie didn’t love and embrace. Debbie will be remembered for her class as well as her sass as she was a direct lady that told it like it was. Her artful ways in the kitchen left all who dined with her wanting more. Debbie’s life ended much too soon but her memory will continue to be with each of us that knew her and we will all miss her greatly. Debbie was preceded in death by both her father Carroll in 2010 and her sister Dana in 2016. Debbie leaves behind her mother Jo; husband Eddie; children Austin and significant other Mollea Renee Cramton, Jessica and husband Waldo Terrones, Justin and fiancé Michelle Jones, Rachel and husband Trace Thompson; three grandchildren; nieces Lacy Jo Douglas and husband Andrew and Kayla Ann Baker; uncles Larry Daniel, Alan Daniel and wife Grace; along with numerous cousins and friends.

The family of Debbie Kay Crouch created this Life Tributes page to make it easy to share your memories.

Send flowers to the Crouch family.