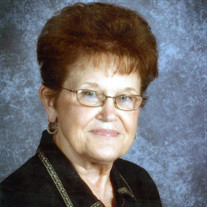 Delores Ann Kilmer, beloved wife, mother, grandmother, great grandmother and friend died at her home in Del City, OK, on July 4, 2021 after a courageous battle with cancer. Born in Oklahoma City on August 5, 1935 to Velma (Dollar) and Thomas Hughes, Delores grew up in Oklahoma City spending many years at the Phillips Petroleum Camp. She attended Crooked Oak High School where she met the love of her life, Jackie Ray Kilmer. They married on November 20, 1954 and were married 54 years before his death on April 15, 2011. Their union produced two sons, Terry Ray Kilmer and Michael Lynn Kilmer. Delores worked at Del Crest Junior High School as a secretary for 40 years where she made many dear friends and was loved by all. She loved OSU sports and any activity her beloved grandchildren were involved in. Being a grandmother was truly the joy of her life. Delores was preceded in death by her beloved husband, Jackie Ray Kilmer, her father Thomas Hughes, mother Velma Hilton and stepfather Hugh Hilton. Delores is survived by her children Terry Kilmer and wife Debbie and Mike Kilmer and wife Brenda; grandchildren Darcy Budde and husband Ryan, Megan Paris and husband Aaron, Ryan Kilmer and girlfriend Leann Farha, Stephanie Lambert and husband David, Tyler Kilmer and wife Brooke, Mikenzie England and husband Lance, Nicole Keith and fiancé Ashton Prescott, and Rachel Keith; great grandchildren, Peyton, Jaxon, Parker, Paisley, Gage, Braxton, Sawyer, Brylin, Brooks and Jude. She also leaves behind an abundance of relatives and friends. The Kilmer family would like to thank the doctors and nurses at Mercy Hospital and Mercy Hospice. A special thanks to Dr. Carla Kurkjian and Hospice RN Sonja.

The family of Delores Ann Kilmer created this Life Tributes page to make it easy to share your memories.

Send flowers to the Kilmer family.