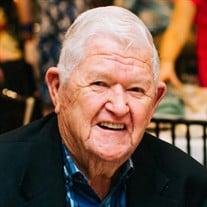 Dewey Lee Gathright, “The Dew”, of Midwest City, Oklahoma, was called to his heavenly home on May 21, 2021, at the age of 90. Dewey was born August 17, 1930, to Franklin and Minnie (Copeland) Gathright of Antioch, Arkansas. The family moved to Idabel, Oklahoma, where Dewey developed a lifetime work ethic of hard and faithful service. The family mattress factory and farm were some of his first jobs and upon graduation from Idabel High School in 1948, Dewey went to work for a local lumber company for a few years. After a short stint in the US Army, Dewey set out for Oklahoma City to seek employment. His daddy encouraged him to seek out a church home as well, giving him the name of a church to visit. It was there he met the one and only love of his life, Carol Ann McClure, a 17-year-old freckle-faced redhead. Dewey was the only one with a car, so he quickly became the chauffeur for the young adult outings. The group became a couple when Dewey invited Carol to a church softball game. After a few dates, Dewey made his legendary proposal at one of those games, and they were married two months later on July 14, 1956. That union remained bound together for almost sixty-five years. Dewey & Carol became members of Capitol Hill Baptist Church in the late 1950’s where Dewey caught the attention of an executive of Central Fixtures Manufacturing, a division of TG&Y. Dewey’s career with Central Fixtures spanned 25 years beginning in the mill, constructing display shelving for the retail stores and spending his final ten years with the company as an Installation Supervisor, a job that took him across the nation. Dewey then worked in the Plant Operations Department of the Oklahoma City Community College from 1985 until his retirement in 1996. After a year of retirement, he was ready to go to work again. This time, “Mr. Dewey” was a beloved school bus driver in the rural part of the Mid-Del School District, retiring for a second time in 2012. Three children were born to Dewey & Carol: Lisa Kaye, Dane Leroy, and Curtis Lee, each six years apart, allowing a span of 24 years' worth of involvement in school and church activities. Dewey served as a driver for numerous church and school field trips. Together with Carol, he supported his children by attending years’ worth of concerts, recitals, sporting events and church and school programs. He and Carol have continued that support for their grandchildren and great-grandchildren. The Gathright house was always a favorite hangout where Dewey welcomed all of the kids’ friends and, without trying, made each one feel special. Music was a central part of the family’s life, as Dewey loved to sing and always enjoyed listening to his children, grandchildren, and great-grandchildren make beautiful music. He had an old gospel song for everything. When Dewey was a child, he trusted in Jesus as His Savior and lived his life walking faithfully with God. He and Carol made church a priority, serving as members of Capitol Hill, First Southern and Meadowood Baptist Churches where they taught preschool Sunday School together, and Dewey served as Deacon and bus driver, among other roles. Dewey is survived by his wife Carol Gathright and their children Lisa Barsaleau and husband Brian of Oklahoma City, Dane Gathright and wife Lisa of Moore and Curtis Gathright and wife Kenna of Bartlesville; he is the beloved Papa to seven grandchildren: Jana Brown and husband James, Haley Mounts and husband Ryan, Dustin Gathright and wife Mackenzie, Colton Gathright, Molly, Toby and Andy Gathright; and nine great-grandchildren: Charis, Gwyneth, Lily, Megan, and Darcy Brown; Henry and Tyler Mounts; Lyla and Nora Gathright; he is also survived by his only sister, Faye Sanders, and numerous nieces and nephews. He was preceded in death by his parents and three brothers. Dewey was known to all as hard-working, faithful, steady, and loyal. He had an often-surprising sense of humor, and while he was a humble man of few words, his kindness, presence, wisdom, and strength provided great stability for his family. Dewey lived life as a faithful child of God, and through that faith, God has provided innumerable blessings to our family. A celebration of Dewey’s life will be Wednesday, May 26th, 1:00 p.m. at Meadowood Baptist Church, 2816 N Woodcrest, Midwest City.

The family of Dewey Lee Gathright created this Life Tributes page to make it easy to share your memories.

Dewey Lee Gathright, “The Dew”, of Midwest City, Oklahoma, was...

Send flowers to the Gathright family.