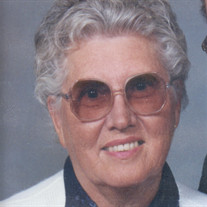 Dolly Jean Place Mashburn was born August 8, 1928 at Stroud, Oklahoma to Logan and Mattie Platz Place. She passed from this life on December 27, 2019. Dolly’s parents moved to Stroud in 1927 so her dad could help build Route 66 with his team of horses and a slip. Dolly graduated high school at Stroud and on August 11, 1946, she married Glenn Mashburn. To this union, two children were born, Lou Ann Mashburn and Tommy Glenn Mashburn. Dolly was baptized into Christ in 1956. Dolly and Glenn and their children moved to Oklahoma City in 1962 and then to Moore in 1969. Dolly has attended Central Church of Christ since that time. Dolly began working in the public at age 15 at Gray’s Variety Store in Stroud’s. She also worked at a grocery store and an income tax office before going to work in the Lincoln County Department of Public Welfare Office. After moving to Oklahoma City, Dolly worked at the State Office as Administrative Secretary and then transferred to Cleveland County retiring as Casework Supervisor. Her most recent employment was with Mission Life Insurance Company as a Preneed Counselor. Dolly has been active in the Central Church of Christ in Moore, particularly in the area of World Bible School and Monday night for the Masters. She is survived by one daughter, Lou Ann Mashburn Copeland, one granddaughter, Vanessa Moss Murrah; one grandson, Justin Glenn Mashburn; two great granddaughters, Breanna Doran and Makala Copeland; two brothers, Bobby Place and his wife Lisa June of Ada and Billy Place and his wife Brenda of Quitman, TX; as well a other nieces and nephews, relatives and friends. Preceding her in death was her husband, Glen; son Tommy Glenn; her parents; one sister and two brothers. A come and go viewing for Dolly will be held at Ford Funeral Service on Thursday, January 2 from 12:00 - 8:00 PM. A funeral service will be held at Central Church of Christ in Moore, OK on Friday, January 3 at 11:00 AM with burial to follow in Stroud, OK at 2:00 PM at Stroud Cemetery.

Dolly Jean Place Mashburn was born August 8, 1928 at Stroud, Oklahoma to Logan and Mattie Platz Place. She passed from this life on December 27, 2019. Dolly&#8217;s parents moved to Stroud in 1927 so her dad could help build Route 66 with his... View Obituary & Service Information

The family of Dolly Jean Mashburn created this Life Tributes page to make it easy to share your memories.

Send flowers to the Mashburn family.