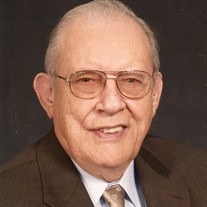 Donald E Badgett, of Del City, went home to be with his Lord on June 22, 2019. He was born the 4th of five children to James Luther and Margaret (Heiskill) Badgett on May 28, 1927 in Seminole, OK. Don was raised on a farm in rural northeastern Seminole County and attended the rural Excelsior Schools. From his parents and grandparents Don learned to respect other people, strong work ethics, honesty and integrity. He served a short time in the US Maritime Service in mid-1944 and early 1945. He entered the US Army on July 5, 1945 and served in the US Army of Occupation in Japan and Korea until March 1947. He worked in the Home Building business in Midwest City for a while and then entered into the retail grocery business until August 1951 when his 124 AC&W Air National Guard Squadron was activated during the Korean Conflict. He continued his military in the US Air Force serving overseas in Korea, Spain, and two Germany tours until his retirement on September 1,1971. Don married Stella Omega Smith on June 26, 1950 and enjoyed more than 51 years of marriage. After USAF retirement he was employed by Motorola C&E Inc as Oklahoma Regional Sales Manager, retiring from that position in February 1986. Don served as a Military Retiree Volunteer at Tinker AFB for over 24 years, working in the Customer Service (ID Cards), MPF, Base Headquarters. Don was preceded in death by his parents; wife, Stella Badgett; brothers, Harold Badgett and RB Badgett; and sisters, Ina Boyle Shamblin and Christine Thetford. After more than a year of being a widower, a mutual friend introduced Don to a very “special lady of his life” and soon they were married and enjoyed 16 years together. Don is survived by his wife, June of the home; one daughter, Cheryl Edwards of Norman, OK; son, Donald E Badgett II and wife Connie of Raymore, MO; 5 grandchildren: Tony Edwards, Bryan Edwards, Sarah Braum and husband Kyler, S/Sgt Michael Badgett USAF and Rebekah Badgett, serval cousins, nephews, nieces and a host of friends. Don loved the Lord, his family, his country, his church and endeavored to teach his children to do likewise. He was a member of Sunnylane Southern Baptist Church in Del City, OK. A service honoring his life will be at 2:00 pm on Thursday, June 27th at Sunnylane Southern Baptist Church under the direction of Ford Funeral Service. Burial will follow at Sunny Lane Cemetery in Del City, OK.

Donald E Badgett, of Del City, went home to be with his Lord on June 22, 2019. He was born the 4th of five children to James Luther and Margaret (Heiskill) Badgett on May 28, 1927 in Seminole, OK. Don was raised on a farm in rural northeastern... View Obituary & Service Information

The family of Donald Edwin Badgett created this Life Tributes page to make it easy to share your memories.

Donald E Badgett, of Del City, went home to be with his Lord...

Send flowers to the Badgett family.