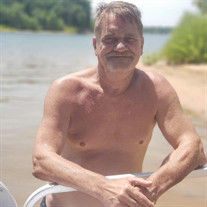 Donald Gerard Kane was called to Heaven on Saturday, March 13, 2021. He was born on February 19, 1957 in Oklahoma City, OK. He is survived by his daughter, Candace (Nikki) Kane, of Midwest City, OK, Tana Schmitz of Oklahoma City, OK, Derek Gregory of Norman, OK, and grandchildren, Faibian and Zaine. He was looking forward to the birth of a grandson, Don, named for him. He is survived by his seven siblings, Harold Kane, Anne Clarkson, Dale Kane, Rose Bathke, Kathleen Perez, John Kane, Helen Ferrer and husband, Paul. He is also survived by many nieces and nephews that he loved dearly. He is preceded in death by his wife and love of his life, Sharon Lavonne Kane, parents, Cletus and Mildred Kane, sisters-in-law Toni Kane and Linda Kane, brothers-in-law Greg Bathke and Frank Perez, and stepson Samuel Gregory. Don graduated from Midwest City High School in 1975. He grew up in Midwest City, and spent lots of time at his grandparent’s orchard on Air Depot, where he spent his time playing outside with his brothers and sisters. He often talked about walking with his Grandpa Remy, and eating fresh fruit picked from the tree, cut with Grandpa’s pocketknife. Don worked as a Master Carpenter in Oklahoma City and surrounding areas with his father for over 40 years. He took great pride in his work and has often been referred to as a perfectionist. His work was often referred to as “a work of art.” Don was skilled in many other things as well. He could fix just about anything and took pride in being able to use his skills to help his family and friends. He also enjoyed working on cars and took great pride in a pickup he rebuilt from the frame up. He purchased some land and moved to Cleveland County in 1983. He was so proud of making his acreage into a peaceful home for our family, and his door was always open for us to come back if we needed to. His family refers to their acreage as “the funny farm” because his home was always filled with laughter. Don loved being outdoors. As a child, he went on many road trips across the United States with his parents and siblings. He cherished those memories and spoke of them often. He had a wild and adventurous spirit. He loved animals and nature and taught his children this love. He took them on many road trips. The place he loved the most was Eufaula, OK, where he would spend every summer taking the family out to swim, fish, and camp. He was happiest when he was on the boat with his family and would stay out on the water as long as possible. One of his favorite things was to be out on the middle of the lake in the middle of the night and look up at the stars. He also liked taking his girls to troll for sand bass. He would always take the fish off the hook for his daughter Nikki. Don loved his children and family and would be there any time anyone asked for his help, no matter what. He was the dutiful son and a caring dad. We could always count on him to rescue us out of a bad situation. He would get up in the middle of the night or drive hundreds of miles if he had to, to make sure his family was okay. Strikingly handsome, he was admired by many, but he only had eyes for his Sharon. He was a loyal and dedicated family man. He will be remembered for his generosity, his selflessness, and his sense of humor. Most of all, Don is remembered by everyone who met him for his kind soul and a gentle heart. He will be greatly missed by all who knew him.

Donald Gerard Kane was called to Heaven on Saturday, March 13, 2021. He was born on February 19, 1957 in Oklahoma City, OK. He is survived by his daughter, Candace (Nikki) Kane, of Midwest City, OK, Tana Schmitz of Oklahoma City, OK, Derek... View Obituary & Service Information

The family of Donald 'Don' Kane created this Life Tributes page to make it easy to share your memories.

Donald Gerard Kane was called to Heaven on Saturday, March 13,...

Send flowers to the Kane family.