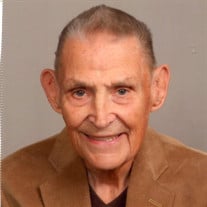 Donald Lawrence Muller, 88, of Oklahoma City died on December 13, 2019. He is preceded in death by his parents Peter and Anna Muller, sister Beatrice Smith and daughter Donna Muller. Don was born on April 5, 1931 in Slayton, Minnesota and grew up on a farm in Tracy, Minnesota. He joined the United States Air Force after high School in 1948 and proudly served in the Air Force for 28 years, retiring in 1976 at the rank of Senior Master Sergeant. During his career, Don was stationed in Japan and Quebec, Canada with tours of duty in Phu Cat and Tan Son Nhut air bases in Vietnam. Don met Linda while stationed at Tinker Air Force Base and they were married on February 24, 1972. After retiring from the Air Force, Don settled in Del City, Oklahoma and worked in banking and finance while earning an associate’s degree in business from Rose State College. Don and Linda moved to Clarksville, Arkansas in 1983 where Don worked as a hospital administrator and he and Linda enjoyed the country life, trips to Branson and became Arkansas Razorback basketball fans. The birth of grandchildren brought Don and Linda back to Oklahoma City in 1995 where he continued to work in finance. Don was a strong man of faith and served as Deacon at First Baptist Church of Midwest City, Oklahoma and was a member and active volunteer at Village Baptist Church in Oklahoma City, Oklahoma up until his death. Don was a regular figure at Edmond Santa Fe high school baseball games where he cheered for the team but mainly for his grandsons Daniel and Ryan. “GPD” (Grandpa Don) was their number one fan. He loved his grandson Erik and thought he was the smartest kid he ever met and liked to say, “That Erik is something else!” Linda was the love of his life. Don said that he was put on Earth to spread the gospel of Jesus Christ and to take care of Linda. He accomplished both. Don was a kind and compassionate man who will be missed. He is survived by his wife Linda, stepson Mark Knutson and daughter-in-law Mary Knutson of Oklahoma City, grandsons; Daniel Knutson of Kansas City, Missouri, Erik Knutson of Norman, Oklahoma and Ryan Knutson of Oklahoma City, Oklahoma.

Donald Lawrence Muller, 88, of Oklahoma City died on December 13, 2019. He is preceded in death by his parents Peter and Anna Muller, sister Beatrice Smith and daughter Donna Muller. Don was born on April 5, 1931 in Slayton, Minnesota and grew... View Obituary & Service Information

The family of Donald Lawrence Muller created this Life Tributes page to make it easy to share your memories.

Send flowers to the Muller family.