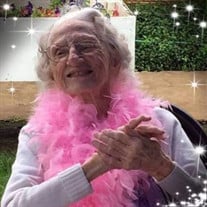 Donna Nautilla McIntyre Peterson joined her Lord, (at the age of 103 years) the 12th of November 2020. She was born August 15, 1917 to George and Myrtie McIntyre in Oklahoma City, Oklahoma and lived most of her life in the general region. She graduated from high school at Choctaw, OK. She had one great love in her life and married Charles (Blackie) Murphy-Peterson February 27, 1939. They made memories and raised daughters together for 36 years until his death in 1975. She traveled with him during World II all through the southern United States building military airplane hangars. There are so many stories of their adventures during that time. They moved back to Oklahoma City and built a house (in what was the country) behind his parents. Later in their lives they moved to Guymon, OK, to Hobbs, NM and Odessa, TX with his job. Donna made a comfortable home for them wherever they were. Donna worked at a little diner until she married and became a fulltime homemaker and later the mother to Frankie Ann and Charlotte Raye. She was an incredible cook and loved feeding people. She worked as a volunteer at the Mid Del Food Pantry until she was 88 years old. According to a great grandson she made the best apple pie in the world and she ALWAYS wanted to feed everyone who came to her house. She loved flowers and always had beds and beds of them. She also worked in the vegetable gardens that were always growing in the summer months. She was an avid Walker and she loved to dance and was still doing both at 103. A devote Christian with a deep love and trust in her Lord she was a member of the Presbyterian church and participated in many church activities. At the time of her death she was a member of the First Presbyterian Church of Midwest City. She loved to leave church just a few minutes early and set up coffee hour for everyone. She always wanted to provide for the children who in time referred to her as the (Kool Aid Lady). Family was the most important thing in Donnas life. She loved deeply and had a way of making each person feel special and she was always there to help when needed. She had many names Donna, Momma, Grandma, Grandma Pete, Auntie, Aunt Baby, Baby and Sister. She is survived by her daughter, Frankie Ann Peterson-Herzer; sons-in-law, Calvin Barbaree and Spencer Herzer, niece/daughter Carole Johnson Clark and husband Earl; Granddaughters Michelle (Mickey) Barbaree Hoopes and husband Chris Hoopes, Amarillo, TX; Joana Barbaree Jeffries and husband Robert, New Braunfels, TX, Noelle Barbaree Lankford and husband Toby, Amarillo, TX and Donna (Donnie) Horn Shifflet and husband Billy of New Franklin, MO, A brother Stanley McIntyre and Marilyn, Oklahoma City. Great Grandchildren Tyson/Krystal Hopper, Norman, Ok. Trista Hopper and Amirah Kioh, New Franklin, Mo; Danin Kioh, Glasgow, MO, Jenny Hopper, Columbia, MO, Lane Kioh, Ronnie and Joshua Shiflett, Fayette, MO; Chelsea and Rachel Lankford, Joel and Drew McGallien, Justin and Cody Hoopes, Amarillo, TX; Linsey Jeffries, Denver, CO; Brayden Jeffries, New Braunfels, TX, Bryan and Natalie Cheeks, Norman, OK. Great-Great-Grandchildren Bella and Ivy Hopper; Trevian and Layla Cowans; Gabe Hopper, Huntir Lyons and Sylas Benedict; Saphira and Rylan Kioh; Adelyn, Kinley, Bowen, Harlow and Willow Hoopes, Kalum and McKenzie Cheek. Donna is also survived by many nieces, nephews, and friends. She is preceded in death by her husband, Charles (blackie) Peterson; daughter Charlotte Raye Peterson Barbaree; parents George and Myrtie McIntyre; grandparents Elizabeth and Arthur Robison; mother and father-in-law John and Bessie Murphy; grandson Charles David Horn; sisters George (sissie) McIntyre Johnson; Yvonne (Sug) McIntyre Marvin; brother Bobby McIntyre; brothers-in-law Billy Marvin and James (Jim) Johnson; sisters-in-law Gloria McIntyre and Jackie McIntyre. Due to COVID-19 there will be no formal service. burial will be private for everyone's safety. COVID-19 took her life and we don't want other to fall ill. she loved you all deeply. We are all going to miss her feisty little self. A celebration of life service and gathering of family and friends will be held in late spring or early summer where memories and love can be shared. Donations can be made in Donna’s memory to the American Heart Association and the American Cancer Association.

Donna Nautilla McIntyre Peterson joined her Lord, (at the age of 103 years) the 12th of November 2020. She was born August 15, 1917 to George and Myrtie McIntyre in Oklahoma City, Oklahoma and lived most of her life in the general region. She... View Obituary & Service Information

The family of Donna N Peterson created this Life Tributes page to make it easy to share your memories.

Donna Nautilla McIntyre Peterson joined her Lord, (at the age...

Send flowers to the Peterson family.