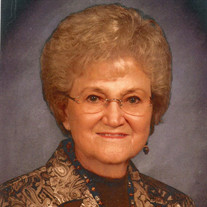 Dorothy June Alexander Badgett, 90, passed away peacefully on Monday, January 25, 2021. She was born on June 1, 1930, in Coal County, OK to James and Cleo (Sullivan) Wheat. She married Boyd Anson Alexander on July 3, 1952 in Oklahoma City. June worked in retail for JCPenney for 9 years, following she was Treasurer at the City of Del City for 10 years and ultimately at BancFirst where she retired in 2004. She enjoyed traveling on long road trips and gardening with Boyd. When Boyd passed in 1987, June enjoyed traveling with church groups to different locations across the states. Through friends June was introduced, in 2002, to Don Badgett who she wed on February 14, 2003. June was known for her pristine style, kind heart and her ability to connect with anyone. June loved visiting with others and received great joy in building friendships. She was loved by so many and everyone that knew her always had kind words to say and would mention how she knew so many people and so much about each one. June was fortunate to have had two wonderful men who adored and catered to her every shopping whim and ice cream craving. June is survived by her daughter, Barbara (Bobbie) Bohuslavicky, of Oklahoma City, son, Tony, and wife, Tonya Alexander of Del City. Grandchildren Robert Bohuslavicky, Kellie and Shawn Wilbanks, Steven and Tiffany Bohuslavicky, Jason and Shella Bohuslavicky, Dusty and Jamie Alexander, 14 great grandchildren and 3 great great grandchildren. Preceded in death by her parents, James and Cleo Wheat, siblings, Cordia Howry, Raymond Wheat, Lillie Ann Whisenhunt and Ruth Jane Albertson; husbands, Boyd Alexander and Don Badgett. In lieu of flowers please consider making a donation on honor or June to the Oklahoma Alzheimer’s Association by using the link below. https://act.alz.org/site/Donation2?df_id=32112&32112.donation=form1&utm_source=google&utm_medium=paidsearch&utm_campaign=google_giving&set.custom.wt=giving&gclid=CjwKCAiAgc-ABhA7EiwAjev-jw-TzRndHP8_3iBhFdpZqYdI-H4B0ZlUcUM4d5BcmA4Qi6QrgyGKUhoCm2cQAvD_BwE

The family of Dorothy June Badgett created this Life Tributes page to make it easy to share your memories.

Send flowers to the Badgett family.