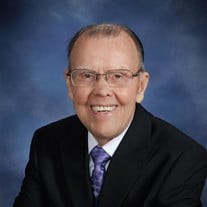 Doyle Robert Sitton was born, the youngest of four boys, in Dadeville, MO on March 10, 1924 to Willie A. and Laura O. (Logan) Sitton. They were a farm family growing up during the depression. Doyle developed a deep love for his mother as he worked at her side in witness of the hard life she led. His older brothers worked most often with their father on the farm or took outside jobs to assist with family needs. The family moved to Greenfield, MO where he attended grade school 3 years and later to Golden City, MO, where he spent 4 years in a one-room country school. His brother, Kyle, would create a little humor with the comment that “One year Doyle was in class by himself”. After a farm sale, the family moved into the town of Lamar, MO where Doyle attended school from 8th grade through high school. In 1942, Doyle graduated from high school and moved to Detroit, MI, where he obtained employment in civil service at Romulus AFB. Doyle was drafted into military service in 1943 and served in the US Army Air Corp during WWII. Honorably discharged after 3 years, he joined the Air Force Reserves and returned to civil service employment, this time at Tinker AFB, OK. He served 21 months of active duty starting in 1951 during the Korean Conflict, 1 year, in 1961 during the Berlin Crisis, and a short mission in 1966 carrying supplies into Vietnam. After each deployment, he returned to civil service employment at Tinker AFB, OK. Doyle retired as SMSGT, Aircraft Loadmaster in 1967 from Air Force Reserves. He retired in 1979 from Civil Service as a Transportation Officer with 37 years combined civil and military service. Doyle was justifiably proud that decisions made early in his life and career worked to his advantage, despite a humble beginning. Doyle enjoyed TV sports, especially football and golf. He was a fan of traditional country music and spent fun times at the casino playing his favorite game of Ultimate Texas Hold’em. He had great times traveling with wife, Geneva, especially the Alaska, Hawaii, Panama Canal and various Caribbean and Mexico cruises. He treasured the good times spent with family and friends. Doyle converted to Catholicism and loved his parish family at St. Philip Neri, Midwest City where he served as Communion Minister. For several years, he and Geneva delivered mobile meals for the parish, a service performed in cooperation with 4 other churches in Midwest City. Doyle was a proud member of the volunteer auxiliary at Midwest City Hospital for 25 years starting in 1990. He was predeceased by his parents and brothers Kyle, Kenneth and Duane. Doyle is survived by his wife of 40 years, Geneva (Mayer) of the home, 2 children James (Jim) and Linda Roberson, Harrah. Extended family, Michael Block (Donna) McCloud, Anita Smith (Brad) Xenia, OH, Gregory Block (Brenda) Harrah. 10 Grandchildren, 8 Great-Grandchildren, 4 Great-Great Grandchildren and many cherished relatives and friends. He was a loving husband, father and grandfather and will be remembered for his caring, compassionate, tender heart. Friends may drop in for private visitation at Ford Funeral Home from 8:00 AM to 4:00 PM on Thursday, 18 July 2018. Wake service will be 7:00 PM on Thursday, 18 July, at Ford Funeral Home in Del City. Funeral Service is scheduled for 10:00 AM on Friday, 19 July, at St. Philip Neri Catholic Church in Midwest City In lieu of flowers, contributions may be made to St. Philip Neri Building Fund.

Doyle Robert Sitton was born, the youngest of four boys, in Dadeville, MO on March 10, 1924 to Willie A. and Laura O. (Logan) Sitton. They were a farm family growing up during the depression. Doyle developed a deep love for his mother as he... View Obituary & Service Information

The family of Doyle Robert Sitton created this Life Tributes page to make it easy to share your memories.

Doyle Robert Sitton was born, the youngest of four boys, in Dadeville,...

Send flowers to the Sitton family.