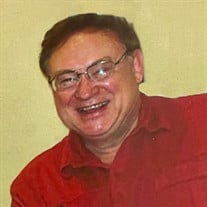 Gene Lewis passed from this world just 3 days short of his 80th birthday. He was born in Checotah, OK on January 16, 1942. To know him was to love him, he made friends wherever he went. He was preceded in death by his parents, Idus Truman Lewis and Anna Faye Davenport Lewis as well as siblings, Conrad Lewis, Anna Sue Lewis Harting and G.T. Lewis. He is survived by five nephews and four nieces and a multitude of cousins. Being an active member of the Eastwood Baptist Church, he had a large supportive church family. Gene was an active member of the Choctaw High School Alumni group, being graduated from Choctaw High School in 1959. After high school like so many young men at that time, he joined the Air Force and was sent to Vietnam. He was very proud of serving his country as a Vietnam Vet, but held the memories inside and seldom spoke of it. His nephews were under the impression that the Vietnam experience was something he wanted to keep private and not talk about it. He was very PROUD to serve his country. He was a true Patriot. After Vietnam, he went to work for Tinker Air Force Base working as an airplane mechanic for 30 years. He attended college through the Tinker education program. It was gratifying to him to receive college credits while working. Gene had a multitude of friends and co-workers at Tinker that became like family with him due to the years of working side by side. Gene was always happy, loving, caring and giving to all who had the opportunity to know him. Since a very early age, Gene was a mega OU FOOTBALL FAN. He was consumed with OU FOOTBALL, it being a huge part of his life. He was a season football ticket holder for over 40 years, member of the Sooner Touchdown Club and the Booster Club. He almost never missed an OU home football game and attended many of the away games. He loved to tailgate, laughing with his friends and relatives as he enjoyed the foods and the company. He was proud of his "special" parking place that he used for years. Uncle Gene will be missed and always be remembered by his family and friends.

Gene Lewis passed from this world just 3 days short of his 80th birthday. He was born in Checotah, OK on January 16, 1942. To know him was to love him, he made friends wherever he went. He was preceded in death by his parents, Idus Truman Lewis... View Obituary & Service Information

The family of Earnest Gene Lewis created this Life Tributes page to make it easy to share your memories.

Gene Lewis passed from this world just 3 days short of his 80th...

Send flowers to the Lewis family.