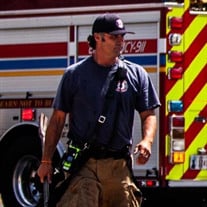 Eddie Wayne Ellis (A.K.A. Cousin Eddie), 42, of Choctaw, OK, died June 12, 2020 in Oklahoma City. He was born September 14, 1977 in Oklahoma City to parents Kenny and Martha Ellis. Eddie and his wife, Tia, were high school sweethearts. They met in 1995 and got married in Oklahoma City on February 11, 2000. Eddie became a firefighter on September 11, 2003 with Midwest City Fire Department. On October 1, 2014 he was promoted to the rank of Lieutenant. When Eddie was away from the fire department, he enjoyed spending time with his wife, girls, family, and friends. He loved his family more than anything and was a devoted husband, father, son, and brother. He loved noodling, fishing, and hunting. His skills for carpentry and home-building were the genesis of his company, Redstone Construction. Eddie was a talented artist. His eye for design could be seen in the highlight of a project as large as someone’s home or in the carefully crafted detail of a personal project for a loved one. Eddie had a heart of gold and was always willing to lend a helping hand even at a moment’s notice; he continued that in death through the gift of organ donation. He is survived by his wife, Tia Ellis; daughters, Jaci and Cami Ellis; mother, Martha Ellis; mother-in-law, Terry Williams and Ron Wallace; brothers, Joey Krebs, James Ellis and wife Cailin, Z Williams and wife Heather; nieces and nephews Jayme and Justin Lawson, Colton, Reese and Max Krebs, Fiona and Bella Ellis, Brylee, Luke and Ollie Flesner, Zoe and Colt Williams; many aunts, uncles, cousins, and friends who are considered family. Predeceased by his Father Kenny Ellis; father-in-law Gary Williams; and cousin, Bo Duren. IN LIEU OF FLOWERS PLEASE CONSIDER MAKING A DONATION TO JACI AND CAMI ELLIS FOR A COLLEGE SCHOLARSHIP FUND. https://www.mealtrain.com/trains/v1l8dz

IN LIEU OF FLOWERS PLEASE CONSIDER MAKING A DONATION TO JACI AND CAMI ELLIS FOR A COLLEGE SCHOLARSHIP FUND. https://www.mealtrain.com/trains/v1l8dz