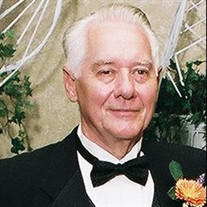 Eddie Rae (Ed) Puckett passed away peacefully in his home on June 15, 2020. Ed was born November 15, 1943, in Tuttle, OK to Clyde and Opal Puckett. He lived in Del City, OK until he married Fredda Beth Wade in 1961, when he enlisted in the US Air Force. While serving his country, he was stationed in San Antonio, TX and Omaha, NE. After leaving the Air Force, he returned briefly to Del City and subsequently spent the rest of his life in Midwest City, where he worked as a civilian employee at Tinker Air Force Base until his retirement in 1999. He retired from Tinker as the acting Chief of the E-3 Engineering and Reliability Branch. Following his retirement, Ed worked as a program manager for TRW (later Northop Grumman) until his retirement in 2010. Ed worked various jobs supporting his family in his younger days, but continued to work for Wade’s Real Estate, Income Tax and Accounting office, later changed to Puckett’s Income Tax until he and Fredda retired from that business as well. His hobbies in retirement included spending time with his grandkids, wine tastings, playing golf, serving his community through volunteer work, and a deep dive into the family history, tracing his heritage back nearly 500 years. Ed was born the youngest of eight children and was a devoted family man and known throughout the area for his community service and volunteer work. He was a member of the Lions Club for more than 30 years, holding every office within the Club, and was elected as the District 3H Governor for 1992-1993. He was a member of the Rotary Cub and Del City Chamber of Commerce, where he served one year as the President. Ed was a devout Christian and an active member of Sunny Lane Methodist Church. His strong faith in God guided his daily life and carried him through many difficult challenges. Ed was proud to be the first in his family to graduate from college. He earned his degree in Electronic Engineering from Oklahoma State University which he proudly attended on the GI Bill. Ed was preceded in death by his wife, Fredda Puckett, of 54 years in 2016; his parents, Clyde and Opal Puckett, his daughter, Gayla Puckett Satterwhite, his brothers, Clyde Puckett, Jr. and Charles Puckett, his sister Luada Delana, and his father and mother-in-law Fred and Inez Wade. He is survived by two daughters, Fredda Puckett of Del City, OK, and Dina Puckett Marney of Shawnee, KS. He is survived by his brother, Carl Puckett (and Gail), of Punta Gorda, FL; and his sisters Betty Wilson, Rita Crawford, and Nadine Fleming (and Robbie), of Spring, Tx; his grandchildren, Jennifer (and Chip) Morano, Raevyn Satterwhite (and Mandy), and Leyton Puckett of Del City; Patricia Satterwhite of Lawton; Colton Marney (and Laura) of Kansas City, KS; Gunnar Marney of Kansas City, MO; and Michelle Marney of Shawnee, KS. Ed was blessed with numerous great grandchildren, nieces, nephews, in-laws, and an extended family he adored and who loved him dearly. Visitation will be held on Friday, June 19, from 9:00 a.m. to 8:00 p.m. at Ford Funeral Home, 305 S. Sooner Road, Midwest City, and family will be present from 4:00 p.m. – 8:00 p.m. There will be a celebration of Ed’s life on Saturday, June 20 at 10:00 a.m. at Ford Funeral Home followed by internment at Sunny Lane Cemetery. In lieu of flowers, the family requests contributions be made to Sunny Lane United Methodist Church, 2020 S. Sunnylane Road, Del City, OK 73115.

Eddie Rae (Ed) Puckett passed away peacefully in his home on June 15, 2020. Ed was born November 15, 1943, in Tuttle, OK to Clyde and Opal Puckett. He lived in Del City, OK until he married Fredda Beth Wade in 1961, when he enlisted in the... View Obituary & Service Information

The family of Eddie Rae Puckett created this Life Tributes page to make it easy to share your memories.

Eddie Rae (Ed) Puckett passed away peacefully in his home on...

Send flowers to the Puckett family.