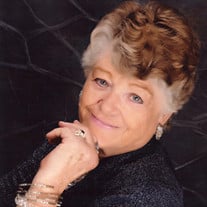 Eldora “Mammy” (Edens) Morrow, 89, was born on June 15, 1930 in Roosevelt, OK to Aaron and Burvie Edens. She met her Lord and Savior, Jesus Christ, on September 4, 2019 in Oklahoma City, OK. She married William “Dub” Morrow, June 24, 1947 and then later graduated from Hobart High School in May of 1948. They enjoyed marriage for 50 years until his passing in October of 1997. Eldora was a homemaker and helped Dub on the farm in Hobart. She worked as a telephone operator for approximately 10 years. She loved the Lord and serving in her church where she sang in the choir. She was a longtime member of First Baptist Church in Hobart, Crest Baptist Church in Midwest City and Sunnylane Baptist Church in Del City. She loved her family and truly enjoyed spending time with her grandkids and great-grand kids. Eldora loved watching college football games, especially her OU Sooners. She leaves behind the family she loved so well: daughter, Teresa Watkins and her son, Mark Hill and daughter, Amy Blankenship (husband, Paul Blankenship); daughter, Regina Colby (husband, Bill Colby) and their children, Jeff Pitts and Mathew Pitts; the late Debra Pershall and her children, Josh and Jake Pershall; the late Blake Morrow and his children, Rodney Morrow (wife, Joslyn Morrow) and Rusty Morrow; fourteen great-grandchildren, Skyler and Tanner Lewis, Zachary and William Blankenship, Kerry and Kevin Pitts, Zyna and Jarom Pitts, Drew and Mia Pershall, Alex, Austin and Caleb Morrow, and Justice and Jaycee Morrow; and one great-great grandchild, Izacc Garanzuay; and her good friend Sondra Carlile; and many other friends and family. Eldora “Mammy” Morrow will be greatly missed by all who were blessed to know her.

The family of Eldora Morrow created this Life Tributes page to make it easy to share your memories.

Send flowers to the Morrow family.