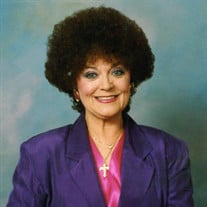 Elva Lorraine Shultz-Robertson “Kitty” passed peacefully Thursday September 2, 2021, surrounded by her children. Kitty was born July 9, 1934, to the late Jerry and Fern Coover in Helena, ok as the baby of 8 siblings she was still very much the boss. She was a graduate of Guthrie High School in 1950 where she was a member of the ROTC, a certified lifeguard and of course Homecoming Queen. After high school Kitty attended two years of business school and began her working years as a secretary for Dolese Concrete. Kitty married the late Royce Shultz in 1952 and they began their life together In Edmond, Ok. Kitty transitioned into a position at General Motors until her retirement in 1990. After the loss of her first husband, she found love again and married Jim Robertson on May 8, 1982. Kitty was a devoted mother and avid music lover. She enjoyed entertaining crowds with her amazing singing voice and her bass guitar. She recorded multiple country albums and performed alongside many famous country entertainers including Conway Twitty and Loretta Lynn. In her later years she could be found performing at Ingrid’s. As much as she loved music, she loved her pets even more. Her children used to joke and say they wanted to be reincarnated as one of their mothers’ pets. Kitty was preceded in death by her husband Jim Robertson, first husband Royce Shultz, son Royce Shultz Jr, and siblings Jerry, Jean, Lu, Marie, Ruth and Ina. Kitty Is survived by her children Kim and Nina Shultz of Chicago Il, Tracie and Woody Steinman of Midwest City, OK, Jamie Bost of Midwest City, OK, Chris and Leesha Manovsky of Choctaw, Ok. Her brother and sister-in-law Jimmy and Larue Coover of Tulsa, ok. Grandchildren Dustin, Damon, Tricia, Carla, Cody, Kylie, Zach, Jessica, Micah, Madison, Boston and Jordan. Multiple great grandchildren, nieces, nephews and a multitude of friends who all loved her dearly.

Elva Lorraine Shultz-Robertson &#8220;Kitty&#8221; passed peacefully Thursday September 2, 2021, surrounded by her children. Kitty was born July 9, 1934, to the late Jerry and Fern Coover in Helena, ok as the baby of 8 siblings she was still... View Obituary & Service Information

The family of Elva L. Shultz-Robertson "Kitty" created this Life Tributes page to make it easy to share your memories.

Send flowers to the Shultz-Robertson family.