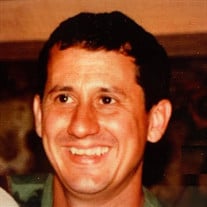 Ernest “Ernie” Leslie Barnes, 69, passed away Wednesday, October 2, 2019 in Tulsa, Oklahoma. He was born in Enid, Oklahoma, on July 26, 1950 to Leslie William Rounds and Erma Ethel Hull. At the age of 2, he moved to Wichita, KS, and in 1960 he moved to Oklahoma City, Oklahoma. Shortly after his move to Oklahoma City, he was adopted by Albert Lester Barnes in 1961. Ernie graduated as Valedictorian from Crooked Oak High School in 1968. He proudly served in the US Navy as an Electrician’s Mate Second Class from 1975-1979. During his service, he served on the USS Constellation (CV-64) and he received the Navy and Marine Corps Expeditionary Medal and First Good Conduct Medal. Following his discharge from the Navy, Ernie began his career with Unarco Industries, LLC, in Oklahoma City, Oklahoma, as a maintenance technician. He was a Christian and attended Sunnylane Freewill Baptist Church where he met Rhonda Jean Irvin and married her in 1985. They then moved with Unarco to Broken Arrow, Oklahoma, in 1986. During his employment at Unarco, he completed his Bachelor’s of Science in Business Administration and then his Master’s of Science in Industrial Management with emphasis of Environmental Health and Safety regulations from Northeastern State University in Talequah, Oklahoma. Their son, Riley Dale Barnes was born on August 17, 1993 and their daughter, Leslie Renee Barnes was born on June 2, 1995. Ernie left Unarco in 1999, having risen to serve as Vice President of Manufacturing. He began working for Vanguard Environmental, Inc., where he retired as Vice President of Compliance Management in 2013. Heaven gained a hilarious, loving and amazing angel. Ernie was truly a force of nature and a man filled with enormous complexity. He had one of the highest IQ’s measured in Oklahoma but was quick to admit he made enormously foolish decisions. He thrilled us, challenged us, delighted us, disappointed us and amazed us. Ernie was always a hippie at heart. He was the source of endless laughter, the loudest and proudest encourager and an empathetic loving father to both of his children. He is survived by his son Riley Barnes; daughter Leslie Barnes; sister Suzanne Ball; nephews David and Patrick Coberley; and several great nephews and nieces. Ernie is preceded in death by his mother Erma, father Leslie, adopted father Albert, brother Bob Rounds, and nephew Mike Coberley.

The family of Ernest "Ernie" Barnes created this Life Tributes page to make it easy to share your memories.

Send flowers to the Barnes family.