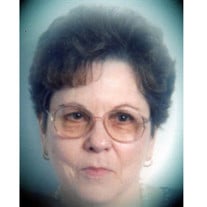 Florence Louise (Greenwood) Rachels-Fringer, age of 91, was called to her heavenly home September 24, 2021. She was born on June 19, 1930 in Borger, Texas to Alexander “Buster” Benjamin Greenwood and Bernyce “Memaw” Margaret (Suber) Greenwood. Florence was their first child and only girl. The Greenwood’s would eventually move to Oklahoma City, Oklahoma, so Buster could work in the Oklahoma City oilfield. The Greenwood’s would have seven children, one girl and six boys. Florence would help Memaw with the chores and raising her brothers. Florence always loved children and enjoyed helping raise her brothers. Florence graduated from Crooked Oak High School and went to work at Fox Vliet, where she met her first husband Cecil Edward Rachels. They had two children, Mark and Kathleen Rachels. Florence remarried on September 11, 1976 to James Fringer. Florence worked for the Federal Civil Service for many years until she retired. She started her career at Tinker AFB in Oklahoma and moved to Sacramento, California to work at McClellan AFB. She even went to community college while she was in Sacramento and got an Associate’s degree. After retiring, Florence moved to Batesville, Arkansas and eventually to Midwest City, Oklahoma. Florence really enjoyed her dogs and treated them like her children. Each dog had several sets of clothes, toys, and treats. She loved working in her flower garden and grew beautiful roses and flowers. Most of all she enjoyed spending time with her family and especially enjoyed her grandchildren and great-grandchildren. Florence is preceded in death by her parents, husbands, her brothers Thomas and Samuel Greenwood, sister-in-law Orena (Campbell) Greenwood, nieces Sonya Greenwood and Stacy Greenwood Monteith, and daughter in-law Cheryl Rachels. Florence is survived by: her brothers Richard and JoAnn, Robert and Sharon, Jerry, and Alexander and Lanelle Greenwood; her son, Mark Edward Rachels and Millie Nunnallee; her daughter, Kathleen Louise (Rachels) Weatherby and husband John Michael; Heather (Weatherby) Mallory, husband Aaron, and their children David, Amanda, and Sara; Jessica Weatherby; Linda Rachels and daughters Victoria and Angela, and many nieces and nephews. The family would like to thank her caregivers Myisha and Catt for taking great care of her for the last several years, allowing her to be comfortable in her own home.

The family of Florence L. Fringer created this Life Tributes page to make it easy to share your memories.

Send flowers to the Fringer family.