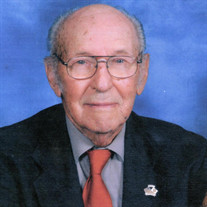 Please click this link to watch the memorial service for Fred C. Hunholz https://www.facebook.com/tracy.mussett/videos/315570773604467 Fred Charles Hunholz age 94.5, passed from this world, July 13th, 2020, in hospice care in Midwest City, Ok. He was born January 18th, 1926 in Seymour, Mo, first son of Pearl and Fredrick Hunholz of Diggins, Mo. He attended school in Fordland, Mo and later joined the Army in June of 1944. Fred was assigned to the 75th infantry as a light duty truck and Jeep driver in Central Europe during WWII and the Battle of the Bulge. He was Honorably Discharged June of 1946. He married Ethylene Berniece Denney of Seymour, Mo, November 1st, 1947. After a short stint farming close to the family farm near Adrian, Mo., he was employed as foreman at the General Motors Assembly Plant in Kansas City, Ks, in the early 1950's. He then changed careers to being a truck and trailer mechanic and welder with the Jack Cooper Transport Co. and was soon transferred to Aurora, Co where he and his family lived for several years. In the mid 1960's, he was transferred to Oklahoma City, Ok and made his residence in Midwest City where he and Ethylene raised their family. He retired at age 58, to enjoy his hobbies of traveling with his wife, gardening, photography, oil painting and blacksmithing. Fred and Ethylene were long standing members at Good Shepherd Lutheran Church and later at East Side Church of Christ in Midwest City. Fred spent the last 4 years of his life at the Norman Veterans Center, in Norman, Ok, where he took full advantage of the craft and art room, attended Chapel, played bingo, and made frequent visits to the pond to feed the geese he so enjoyed. Fred is survived by his children- Steve Hunholz DVM of Jones, Ok, Brenda Holder of Del City, Ok and Berniece George of Mt. Juliet, Tn; five grandchildren- April Davis, Brandon Davis, Amber Sherrill, Joseph George and Christopher George. Two Great Grandchildren- Sebastian and Liam Fisher; and one Great Great Grandson Corbin Sherrill. Siblings include Elizebeth Gower of Concordia, Mo, Virginia Beilharz of Austin, Tx, Ethyl Keesar of Emma, Mo, Lowell Hunholz of Archie, Mo, Milton Hunholz of Haxton, Colo, Carl Hunholz of Emma, Mo and Evelyn Stuhr of Spring, Tx. He is preceded in death by his wife of 63 years Ethylene Hunholz, oldest son Fred Michael Hunholz, three brothers- Leonard Hunholz, Leland Hunholz and infant brother Bernard (Bernie) Hunholz. His family is very appreciative of the wonderful care he received, and the many friends he made at the Norman Veterans Center. He would tell you himself how proud and blessed he was to live at such a nice veterans home. We would also like to thank the staff at Hospice Quality Care Inc. for the fine care they gave him. Services are pending with Ford Funeral Service. He will be interred at Zion Lutheran Cemetery in Diggins, Mo. In Lieu of Flowers donations may be made to the Norman Veterans Center P.O. Box 1668 Norman, Ok 73070

The family of Fred Charles Hunholz created this Life Tributes page to make it easy to share your memories.

Please click this link to watch the memorial service for Fred...

Send flowers to the Hunholz family.