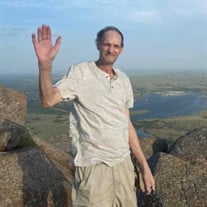 Fred Joseph Zagaruyka triumphed over cancer and joined his father in heaven on September 7th 2020. Fred was born on August 11, 1961 to Fred and Kitty in Mobile, AL. and was the 5th of 5 children. He married Terry Lynn Maronay on January 1st 1985 and has 3 children and 7 grandchildren. Fred has always been a hardcore Bama fan and the throw with his urn is there as one of his last requests, so in his honor ROLL TIDE!!! Fred was also a master craftsman with metal. If you’re riding in an elevator at Shepard’s mall or climbing the custom spiral staircase at the FBI, you should thank Fred for getting you there. The entire design and construction of the spiral staircase was one of Fred’s masterpieces. He was always fully committed to his work and was so respected and appreciated at BlastPro that during chemo he worked when he could for as long as he could, which at times were only a few hours before needing some rest, but then right back up and at it again. If you ever needed something fixed, you knew who to call. There wasn’t a time he couldn’t figure something out. Fred is survived by, his wife Terry, son; Justin, daughters; Ashley and husband Brandon, and Erica, grandchildren; Rick, Zack, Heaven, Hayley, Rylee, Reagan, and Lincoln, mother; Kitty, brothers; Ed and wife Becky, Nick and wife Jackie, Tom and wife Vikki and sister Tess, numerous nieces, nephews, cousins, and friends. His father Zack “Pops” was waiting for him at Heaven’s gates with a cribbage board, and a feast of fried chicken, sketti and cheese, and corn on the cob, with a dirty pudding chaser. "Earlier this year Fred, his wife Terry, and their granddaughter Hayley went on a weeklong RV trip, often referred to as ‘Fred and Terry’s Most Excellent RV Adventure’.  They drove 18 hours to what is commonly known as one of the world’s greatest wonders.  Stopping in places like Albuquerque, New Mexico and swinging through the Petrified Forest, they made many beautiful pitstops.  Fred stood with his family and overlooked the Grand Canyon in tears at its beauty and was so thankful to be able to have his wife and granddaughter there with him.  They were both honored to be able to give him one last camping trip". - Hayley In lieu of flowers the family would appreciate assistance with expenses. If you would like to contribute please visit https://www.gofundme.com/f/in-memory-of-fred-zagaruyka

Fred Joseph Zagaruyka triumphed over cancer and joined his father in heaven on September 7th 2020. Fred was born on August 11, 1961 to Fred and Kitty in Mobile, AL. and was the 5th of 5 children. He married Terry Lynn Maronay on January 1st... View Obituary & Service Information

The family of Fred Joseph Zagaruyka created this Life Tributes page to make it easy to share your memories.

Fred Joseph Zagaruyka triumphed over cancer and joined his father...