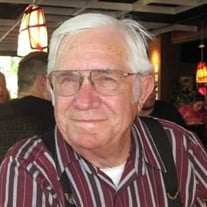 Gene Arnold Smith passed away on the morning of May 18th, 2019. He was born on September 21,1934 in Oklahoma City, Oklahoma to Gerard Archie Smith and Gladys Audrey (Chesnut) Smith. He lived most of his life in Oklahoma except for the two years he spent in Dallas Texas. He met Anna Jo Southall there while she was in nursing school and he was in the Navy. They married on March 29, 1957. They started their family in Dallas then moved to Del City, Oklahoma. He worked at Tinker Air Force Base, starting out as an aviation mechanic and worked his way up to an administrative position (a desk job). He was in several branches of the Armed Forces Reserves for approximately 30 years. After he retired from Tinker, he continued working for a car rental agency until his second retirement. He never stopped working on cars. Gene is preceded in death by his beloved wife Anna Jo, his eldest son Glen A., his parents Gerard and Gladys Smith, his siblings; Billy Ray Smith and Ron L. Smith. He is survived by his daughter, Cheryl L. Smith of Moore, OK, sons Craig E. (Audrey) Smith of Oklahoma City and Kirk A. (Sandra) Smith of Oklahoma City. He adored his grandchildren Angela (Cesar) Ramirez of League City,TX, Grant A. (Miriam) Smith of Del City, OK, Katie (Justin) McLane of Santa Fe, TX, Alyssa Smith currently serving our country in the Navy, Erica Smith, Oklahoma City, finishing her first year of college, Sean Smith, Oklahoma City, who is about to start his college studies, Zachary Jones of Oklahoma City and Adam Jones of Oklahoma City. His great grandchildren were an absolute delight to him in recent years. He never met a stranger. He would strike up a conversation almost everywhere he went. He worked on cars all of his life, but he was not a fan of carpentry. He enjoyed shopping for, buying and selling automobiles for family members. He was quick to loan one of his own vehicles to family members who needed one. Like his wife Anna Jo, he enjoyed family holiday dinners and our large family dinner outings to local restaurants where he and Anna always insisted on paying the bill.

Gene Arnold Smith passed away on the morning of May 18th, 2019. He was born on September 21,1934 in Oklahoma City, Oklahoma to Gerard Archie Smith and Gladys Audrey (Chesnut) Smith. He lived most of his life in Oklahoma except for the two years... View Obituary & Service Information

The family of Gene Arnold Smith created this Life Tributes page to make it easy to share your memories.

Send flowers to the Smith family.