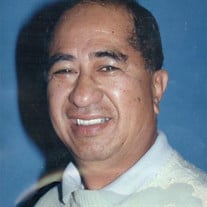 George Tuck Sing Chong passed away at his home surrounded by his family, on December 25th, 2019. George was born on August 27th, 1936 in Kaunakakai, Hawaii to George Fook Kun Chong and Sarah Kalai Kahawai. When he was just six years old, he was sent to Honolulu to be raised by his grandparents and lived with them until the 7th grade. After the 7th grade he returned to Molokai for the 8th grade. In the 9th grade he attended a boarding school on Maui for Agriculture. George then joined the National Guard while he attended technical school. Soon after, he and four of his childhood friends joined the Air Force at the age of 20. While he was in the Air Force, he got to travel to many places and made so many friends. While George was in California, he met his life-long friend Kim Mclaughlin and his future wife Jackie. Jackie was also in the Air Force which gave them an instant connection along with their undeniable chemistry. George and Jackie got married September 23, 1961 at the March Air Force Base Chapel. After getting married, George was immediately shipped to Greenland for a year. He was then shipped back to Honolulu where Mr. and Mrs. Chong made their home and welcomed their first son Keoki. Not long after, in Phoenix Arizona, they welcomed their second son Greg. For the next three years the family of four traveled to Spain before finally landing at their forever home in Midwest City, Oklahoma. After 23 years of service George was able to retire. He did not stop there, he decided he was going to attend college at Rose State where he earned his associates degree in business. While getting his associates he worked at the Oklahoma Blood Institute. He then started working for the State of Oklahoma, where he retired after 18 years. George loved to go bowling and loved to go golfing. He enjoyed watching OU and the San Francisco 49ers as well as the horse races. George is survived by his wife, Jackie Chong; two sons who reside in Midwest City, Keoki and wife Lisa, Greg and wife Marie; siblings, Richard Chong, Irene Tancayo, Victor Chong, Lani Chong, Cecila Chong, Solmon Chong, and Joseph Chong; grandchildren, Aaron and wife Kyla Chong, Shane Chong and Kayla Harris, Mina Chong and Nathan Davis, and Gavin Chong; great grandkids, Maximus Chong and Nixon Chong; and best friends David and Roxie Rapino; as well as so many military families that were dearly loved. He is preceded in death by his parents, George and Sarah Chong; sister-in-law Sweetie Chong, and sister-in-law Shirley Chong; and great-granddaughter Jazlyn Chong. In lieu of flowers, please consider making a contribution to any foundation that holds a place in your heart.

George Tuck Sing Chong passed away at his home surrounded by his family, on December 25th, 2019. George was born on August 27th, 1936 in Kaunakakai, Hawaii to George Fook Kun Chong and Sarah Kalai Kahawai. When he was just six years old, he... View Obituary & Service Information

The family of George Tuck Sing Chong created this Life Tributes page to make it easy to share your memories.

George Tuck Sing Chong passed away at his home surrounded by...

Send flowers to the Chong family.