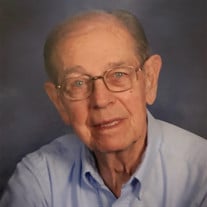 George Wallace O’Gwynn passed away on November 14, 2019 at the age of 96 in Tulsa Oklahoma. He will be cremated and services will be held later. George was born on November 3rd, 1923 in Mobile, Alabama to Marjorie and Reginald O’Gwynn. He graduated from Murphy High School in Mobile. He served in the Army Air Corp during WWll in England. He met his future wife, Agnes Bailey after he returned home at a dance school. They were married a year later, and remained a dedicated couple for 68 years until Agnes’s death in 2015. George was employed by the US government as a civil service worker until his retirement at age 55. He then became involved, with Agnes, in volunteering at the Mid-Del Food Pantry. Soon he became its director where he and Agnes worked as volunteers for years to come. He considered helping the hungry as his life’s work. George and Agnes were also involved in their church, Wickline Methodist Church until they moved to an independent living facility in Tulsa to be closer to their daughter. George always enjoyed electronics, working on and creating radios, early televisions that had tubes and cars. He always had the latest model of computer so he could explore and try to keep up with the latest in innovations. George is survived by his daughter, Glenda O’Gwynn Puett (Don), his two granddaughters Tiffany Puett (Jeff Winesett) and Amanda Shimp ( Michael) plus the joys of his life his five great grandchildren, Lemuel & Lucie Winesett and Grayson, Elijah & Maggie Shimp. He is also survived by his sister Genevieve Pollard of Mobile and brother Claude O’Gwynn of Atlanta, plus nieces and nephews scattered around the country. He was preceded in death by his wife, Agnes and his precious son Michael O’Gwynn as well as his parents Marjorie and Reginald O’Gwynn, and in-laws Pearl & Bernard Bailey, A celebration of life will be held at Ford Funeral Service, 305 Sooner Road in Midwest City at 1:00 on Saturday, December 21st. His, Agnes’s and their cat Grady’s ashes will be spread in the summer in Mobile on their son's Michael’s grave in a family service.

George Wallace O&#8217;Gwynn passed away on November 14, 2019 at the age of 96 in Tulsa Oklahoma. He will be cremated and services will be held later. George was born on November 3rd, 1923 in Mobile, Alabama to Marjorie and Reginald O&#8217;Gwynn.... View Obituary & Service Information

The family of George W. O'Gwynn created this Life Tributes page to make it easy to share your memories.

Send flowers to the O'Gwynn family.