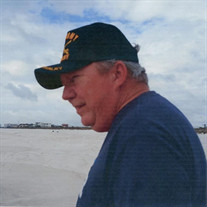 George Morris Percifield was born December 17.1951 in Vincennes, Indiana to Walter Scott Percifield and Emma Jovan Barnett Percifield. He passed away January19, 2022 at his home in Midwest City he shared with his wife Youlanda for 28 Blessed years at in Midwest City, OK 73130. George's parents passed while he was still young, his brother Leo and sister-in-law Naomi whom he called Ma and Pop finished raising George until he graduated high school in Flagstaff, AZ. In 1970, He graduated high school in Flagstaff, Arizona then went to college there until he joined the Army. After his military service George worked as a Natural Gas Compressor Mechanic for over 17 years. He also worked for the State of Oklahoma Employment Security Commission while in college. George married Youlanda Ann Butler February 12, 1994. George studied at UCO in Edmond, OK, and earned both his Master’s in Education with emphasis on Safety in 2000 and his Bachelors in Safety in 1998 Leaving the Oklahoma Employment Security Commission he took a job at Tinker AFB. George worked as an Occupational Safety and Health Manager at Tinker. Then in 2012 with 17 and 1/2 years of service George retired from Tinker Air Force Base. George's greatest joys were becoming a father and grandfather. He was very well loved by all who knew him, he had the kindest, most giving heart of anyone you could ever know. He was called Grampy George by the little children next door and Mr. George by other children in the neighborhood. He was known in our little neighborhood as a master at smoking and grilling meat. Ribs and steaks to be exact. George loved to garden, fish, hunt, go camping, and float the Illinois River and loved to travel. His favorite past time of all was to spend time with his wife Youlanda and visiting with their family. George and his father-in-law Delmer were very close and January 18, 2022 George insisted on making Delmer a birthday cake to celebrate his 80 birthday. This is who he was. He was very thoughtful and enjoyed making others happy. George is survived by his wife of 28 years Youlanda Butler Percifield and his father in law Delmer A Butler both of the home. His brother Shelbert Leo and Naomi Percifield, Kinta, Okla , his sister-in-law Pat Percifield, Stigler, Okla. His sisters Josie and Rocky Johnson of Broken Arrow, Okla and Jennette Bailey of Amarillo, TX. His sister-in-laws, Gayle Butler, Deila Butler, Kris Butler Smith and husband Ronnie, Lisa Haley all of OKC metro. Two brother-in-laws Tim Haley and wife Kay of Ardmore, Okla. Brother in law Russell Rich and wife Marie of OKC. He is also survived by their daughter Kaila and husband Daniel Parrick, Depew, OK. 2 sons Christopher Hill, Georgia. Scott and wife Renee Hill, Choctaw, OK. and a bonus stepdaughter Trixy Inman of Sapulpa, OK. He was the proud Papa of Brody and Blake Parrick, Larkin and Viola Hill along with 4 bonus grandchildren, Dylan Graham, Lexi and Jax Scott, and Ryan Lindquist as well as one great granddaughter Serenity. George was everyone's favorite uncle to his many nieces and nephews and was loved by many family members and friends alike. He will be loved and missed by his little chi-weenie dogs, Lulu and Sasha who were two of his greatest companions. George was preceded in death by his parents Walter and Emma Jovan Barnett Percifield, his son Michael Percifield, and his two brothers Bob and Joe Percifield.

George Morris Percifield was born December 17.1951 in Vincennes, Indiana to Walter Scott Percifield and Emma Jovan Barnett Percifield. He passed away January19, 2022 at his home in Midwest City he shared with his wife Youlanda for 28 Blessed... View Obituary & Service Information

The family of George Morris Percifield created this Life Tributes page to make it easy to share your memories.

Send flowers to the Percifield family.